Artak Kamalyan: The level of food self-sufficiency in Armenia is 73% 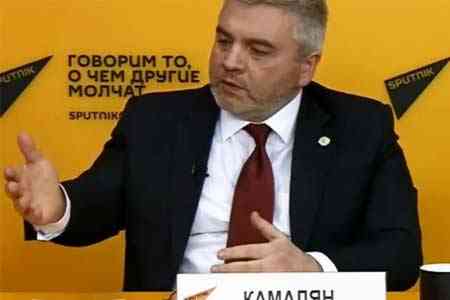 ArmInfo.The positive dynamics of the development of the agro- industrial complex in the countries of the Eurasian Economic Union continues.  Minister in charge of  Industry and Agriculture of the Eurasian Economic Commission (EEC)  Artak Kamalyan stated. In particular, he said that in the first  quarter, agricultural production in the EAEU as a whole increased by  1.6%.

He noted that member countries are taking joint steps to strengthen  food security. According to Kamalyan, In particular,  the Eurasian  Economic Commission has a working group on the prompt supply of  agricultural goods to respond to emerging risks. "This is necessary  to ensure effective interaction between the "five" countries in the  event of force majeure situations," the EEC Minister said. At the  same time, he attached importance to ensuring the physical  availability of food for the population. To this end, the EEC,  together with the member countries, is currently working on the issue  of forming the Eurasian commodity distribution network. "In addition  to reducing transaction costs, the implementation of the project will  eliminate the opacity of the logistics chain, increase the amount of  storage capacity, create a unified system for making decisions and  managing inventory flows," he emphasized.