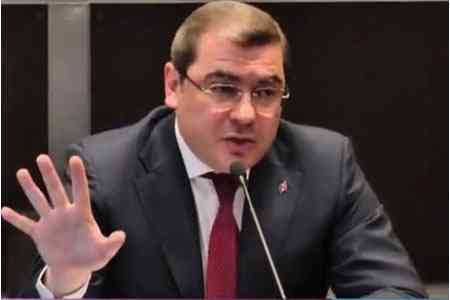 ArmInfo.The Russian ruble began to rapidly depreciate against the US dollar at the end of February amid the Russian-Ukrainian conflict and Western sanctions. Its course rose  to 120 rubles.

After the government and the Central Bank of the  Russian Federation took a number of measures, including raising the  discount rate of interest, the national currency began to revalue and  by May 25 its rate fell back to the level of 55 rubles per $1. In the  first days of the conflict, the Russian ruble also depreciated  sharply in Armenia, but already in April its exchange rate against  the Armenian dram exceeded the pre-crisis figure. As for the exchange  rate of the US dollar against the Armenian dram, it began to grow  sharply and by March 11 reached 518.28 drams. After that, it began to  decrease intensively, and so far it keeps around 410 drams. Former  head of the State Revenue Committee of Armenia, candidate of economic  sciences David Ananyan told ArmInfo correspondent how the situation  will develop against the backdrop of talks about the depreciation of  the Russian currency and the expected next sharp increase in the  refinancing rate of the US Federal Reserve.   According to Ananyan, as of today it is very difficult to forecast  how long the Russian ruble will retain its superiority over the US  currency, since, at this stage, the prospects for the Russian economy  entirely depend not only on the state of the conflict in Ukraine and  its duration, but also on the geopolitical situation that will  develop after the end of conflict. <If we assume that the conflict  will end in a few months, we should try to forecast whether the West  is ready to abandon sanctions against the Russian Federation, whether  they will be lifted immediately or whether this will be done  gradually. Making such a forecast is like a solving an equation with  several unknowns, so we have to rely on the forecasts of high-ranking  Russian officials and eminent experts>, Ananyan noted. In particular,  the head of the Russian Sberbank Herman Gref forecasts that the ruble  will continue to revalue in July, but by the end of 2022 it will go  down and return to the range of 70-75 rubles per dollar.

At the same time, as the economist emphasizes, it is obvious that the  depreciation of the Russian currency will indirectly affect the  exchange rate of the Armenian dram and negatively affect the economy  of Armenia.

<The devaluation of the ruble will lead to a decrease in the  purchasing power of the population and a reduction in gross demand in  Russia. Armenian exporters will have to raise prices for goods  supplied to the Russian market, and then Armenian exports, mainly  agricultural ones, will weaken their competitiveness>, the expert  notes.

As for the dollar / dram pair, according to the former head of the  State Revenue Committee, despite the unprecedented increase in the  refinancing rate (the Fed rate is now at the level of 1.5-1.75%, it  is expected that after the next increase it will reach the level of  3-3, 5%, ed. note.), the exchange rate of the American dollar in  Armenia will remain at the current level for some time. There are  objective reasons for this today, Ananyan believes.

Thus, after the Russian-Ukrainian aggravation, a large influx of  capital into Armenia was recorded. Russia, reacting to Western  sanctions, issued retaliatory sanctions. In particular, it began to  pursue a policy of ousting dollar deposits from Russian financial  institutions. As a result, not only Russians emigrated to Armenia,  but also their dollar assets.

In addition, after relocation to Armenia, IT companies continued  their work with their foreign counterparties in dollars, as well as  pay their employees salaries in dollars.

And the third main reason is that, again, due to Western sanctions,  Russia was forced to switch to trading in rubles, which naturally  affected trade with Armenia. This led to a sharp reduction in demand  for the US currency. In particular, the largest consumer of the  American dollar, Gazprom Armenia, has been making payments with  Russian Gazprom in rubles for several months now. "Against the  background of these events, huge dollar assets were released, and the  account is still in favor of the Armenian dram," Ananyan notes.

At the same time, David Ananyan does not rule out that at some point,  after the end of the Russian- Ukrainian conflict and the lifting of  Western sanctions, the Armenian dram will again overcome the  threshold of 500 drams. According to him, the Russian business that  emigrated to Armenia is in a state of discomfort today, because the  business does not like migration. "If a business established in one  country takes several hundred employees to another, even a very  hospitable one, they will decide to return as soon as possible," he  notes. Consequently, after the end of the conflict and the lifting of  sanctions that impede their activities in the territory of the  Russian Federation, the expats will quickly return to their homeland,  leaving behind a huge financial gap", the economist explains.

At the same time, as Ananyan notes, today the factors and risks  affecting the Armenian economy and its financial market are not  limited to internal aspects. To a greater extent, the Armenian  economy is influenced by external factors, including geopolitical  ones. Therefore, today, when huge dollar flows have come to Armenia,  it is necessary to try to apply certain diversification tools to  implement structural changes in the economy that will increase its  potential. "These cash flows will stop at some point, and the  Armenian economy will begin to collapse. After all, the ratio of the  dollar to the national currency demonstrates the degree of its  stability, the ability of the country's economy to withstand shocks,"  he notes.

According to the expert, today's opportunity should not be used to  increase the current expenditures of the state budget, increase the  minimum wage and pensions, which undoubtedly smacks of populism. On  the contrary, according to him, we should dare to reduce current  expenditures, to carry out large-scale and high-quality capital  investments, which in the foreseeable future - in the future of 3-7  years, will provide results. As the economist emphasizes, capital  investments are not only road construction, but more complex  communications, such as, hubs, schools, etc., he explains.