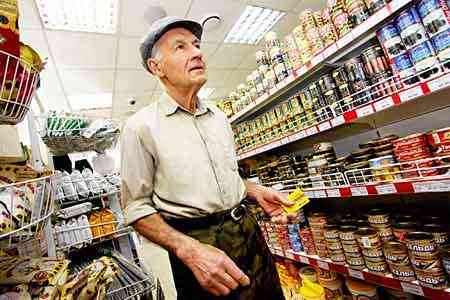 ArmInfo. The increase in food prices by 17.1% significantly affected the low-income citizens of Armenia. This is stated in the message of the Luys Foundation, which  conducted a study of the socio-economic development of the country in  January-June 2022.

According to research presented in the Foundation's telegram channel,  food products play an important role in the consumer basket of  citizens. Moreover, according to the reports of the Central Bank of  Armenia, inflation will continue to accelerate in the coming months.  In parallel, although nominal wage growth continued to be high in  January-May, real wage growth in 2022 remained low due to accelerated  inflation.  In particular, in January-May, the average level of  consumer prices rose by 7.7%, due to which the growth of real wages  amounted to 2.2% alone (data for January-June have not yet been  published).

A significant revaluation of the dram has a negative impact on the  price competitiveness of Armenian products. The average exchange rate  of the Armenian dram against the US dollar in January-June revalued  by about 11.5%, and against the euro - by 22.6%. Although exports  grew by 36.3% under these conditions, it is most likely the result of  re-exports, as imports increased by 48.7%. As a result, if the  exchange rate depreciates, not only exporters suffer, but also  domestic market producers, because they have a problem of competition  with imported goods. And the revaluation of the national currency, in  turn, becomes another serious factor affecting price competitiveness.

According to the authors of the research, in January-June of this  year, the decline in agriculture amounted to 5.5%, which was  reflected in the decline in the country's GDP by 0.6 percentage  points. Moreover, according to the  Foundation's experts, the current  high growth rates of economic activity may be temporary. The  indicator of economic activity accelerated significantly in May-June,  exceeding the 10% threshold and becoming double-digit - 11.8%. Due to  changing geopolitical factors (Russian-Ukrainian conflict), the  influx of capital and labor to Armenia has a significant positive  impact on the RA economy, but these factors may also change.  Therefore, the current positive situation should be used to increase  production opportunities in the economy and the potential of the  economy so that risks of economic crisis do not arise after a  positive shock. Meanwhile, at present, no such trends are observed,  and no visible steps are being taken by the state to direct the  available resources to the development of the economy.

There is also a significant increase in private transfers. In May,  the net inflow of money transferred to Armenia through the banking  system (the difference between inflow and outflow) amounted to $265.9  million, which is about 3.4-fold more than in the same month last  year. The  funds transferred from the Russian Federation grew  especially sharply, which is one of the significant factors in  revaluation of  the nominal exchange rate. Therefore, here too, it is  necessary to use state policy, especially the instruments of the  Central Bank, so that growing remittances do not have a negative  impact on the country's financial system.