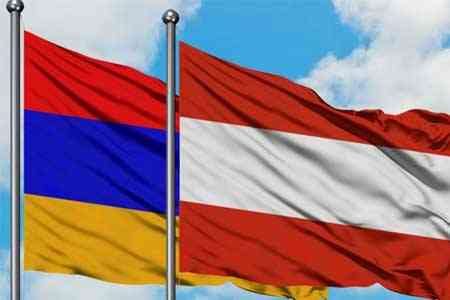 ArmInfo. Armenia is among the priority partners of the Austrian Development Agency (ADA), Armenia's Deputy Minister of Economy Arman Khojoyan wrote in a Facebook message as he commented on his meeting with ADA representatives.

"The Austrian Development Agency is highly appreciating its  cooperation with Armenia. As a result, our country is among the 11  priority partners for the ADA," he writes.

In September 2015, the Austrian Development Agency (ADA) launched the  Organic Agriculture Support Initiative (OASI) in Armenia. For three  and a half years, ADA implemented the EU initiative worth 3.3 million  euros in cooperation with a project team in Yerevan and the Armenian  Ministry of Agriculture. The Austrian Development Cooperation  contributed 500,000 euros to the total budget. OASI is considered a  pioneering project in two ways: So far, it has been the largest  initiative of its kind ever managed by ADA for the EU in Armenia.  Secondly, it has been the first cooperation in the country with ADA  being both donor and implementing partner. In March 2019, the closing  ceremony was held in Dzoraghbyur, Armenia.  On this occasion, Piotr  Switalski, Ambassador and Head of the EU Delegation in Yerevan,  Garnik Petrosyan, Armenian Deputy Minister of Agriculture, and the  ADA staff also celebrated the opening and expansion of two so-called  "Green Training Centres" in the provinces of Kotayk and Tavush.

In 2020, Armenia's Ministry of Economy and ADA signed a memorandum of  understanding providing for expert consultations and advices on  agricultural policy development, improvement of laws and creation of  necessary conditions for development of Armenia's green agriculture.

Early this year, the European Union (EU) launched an EU4Environment -  Water Resources and Environmental Data programme in Armenia. The new  programme will contribute to the EaP countries' longer-term  environmental, climate, and socio-economic resilience. The programme  aims to improve human health and wellbeing, as well as the  achievement of the Sustainable Development Goals (SDGs) in Armenia,  Azerbaijan, Belarus, Georgia, the Republic of Moldova and Ukraine.

The ADA Armenia office was opened in Armenia during a visit paid to  Armenia by Foreign Minister Alexander Schallenberg.