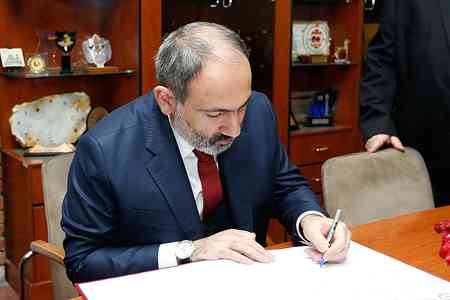 ArmInfo.Chaired by Prime Minister Nikol Pashinyan, the work of the session of the Economic Policy Council under the Prime Minister of the Republic of Armenia was held  August 6 and 7, at the Dilijan educational and research center of the  Central Bank of Armenia.

On August 6, the participants discussed issues related to economic  policy of Armenia, current situation and forecasted developments are  the subject of discussion. The Government Action Plan, macroeconomic  developments, monetary and fiscal policy, improvement the  competitiveness of agriculture, development of the food system, and  other topics were discussed.

Minister of Finance Tigran Khachatryan, Minister of Economy Vahan  Kerobyan and Head of the Dilijan Research Center of the Central Bank  Armen Nurbekyan made reports. In his report, the Minister of Finance  referred to the 2017-2021 economic developments, fiscal policy  priorities for ensuring high economic growth in the medium term,  macroeconomic indicators expected by the Government's Action Plan,  current and capital expenditures and a number of other issues. The  Minister of Economy presented a summary report on the implementation  of the economic plan of the Government, the effect of the exchange  rate on the economy and exports. In his report, the Head of the  Dilijan Research Center of the Central Bank referred to the monetary  policy, inflation and currency developments, uncertainties due to the  pandemic and war and forecasts.

The participants of the session expressed their observations, an  exchange of ideas took place on the issues raised in the reports,  economic trends and development prospects. Reference was also made to  the economic challenges caused by the international situation.

The Prime Minister noted that the priority goal of the Government is  the development of human capital, and for this purpose, radical  reforms are being implemented in the field of education. In this  context, reference was made to the Government's programs aimed at  increasing the productivity of the economy and creating  knowledge-based economy.

On the second day of the session, issues related to sustainable  development of agriculture and food system, improvement of  competitiveness of agriculture through land reforms were discussed.  Deputy Minister of Economy Arman Khojoyan made reports.  He referred  to the Government's vision of the sustainable development of the food  system, which is aimed at the development of high-value agricultural  products. strategic goals, priorities, challenges and current  programs were presented. He noted that in 2021 the gross agricultural  output amounted to 933 million AMD, recording an increase. The  effectiveness of the state agricultural equipment leasing program was  emphasized, within the framework of which equipment is renewed by 2%  per year. today there are more than 26,000 units of agricultural  machinery in Armenia, and the increase in productivity in some  directions, for example, in the field of export of canned fruits and  vegetables is conditioned by the successful course of this program.  The efficiency of intensive orchard establishment and agricultural  risk insurance programs were also mentioned.  A discussion was held  about the agricultural reforms of the Government and the toolkit for  promoting productivity. Issues related to the tax rates applied to  food products were discussed, observations and recommendations were  presented.  Next, the concept of improving the competitiveness of  agriculture through land reforms was presented. It was noted that it  is aimed at overcoming the problems of land fragmentation, low  availability of irrigation water and financial resources, poorly  developed infrastructure, and the complexity of the property transfer  process. For this purpose, state support programs are already in  place: creation of agricultural cooperatives, subsidizing interest  rates on agricultural loans, etc. It is also planned to implement a  pilot project in 4 settlements using land consolidation, support for  legal documentation processes through an online platform, and other  tools.  The Prime Minister noted that the primary reason for the  non-use of land is the lack of the land market, and the land reform  should be primarily aimed at its formation. An exchange of ideas took  place around the presented concept. The possible measures for the  development of irrigation infrastructures, increasing the  productivity of agriculture, increasing the level of land usability  and options for solving existing problems were discussed.  Summing  up, Armenia's premier said, in particular:  "We have agreed that the  "Center for Economic Perspectives" Foundation, under the leadership  of Mr.  Javadyan, will organize, take an organizational role to carry  out the work and communication of this council, which is very  important.  "We have, for example, many programs where we provide  some movement but not the process. And I will not be ashamed to admit  that the most vivid example of it is the digitalization agenda in the  Republic of Armenia, when we recorded that in fact a lot of effort is  being invested in the field of digitalization, huge resources have  been spent in the last 20 years, and work has been done, but nothing  has happened in terms of digitalization. We want to understand why so  many resources have been spent, but in the field of digitalization,  the Republic of Armenia is actually in a very initial situation. It  turned out to be the same problem because we did not solve the horse,  yoke and carriage issue. We decided to turn to expert assistance to  understand how to transform the movement in that area into a process.  And when the experts arrived, they were able to help us understand  that, so to speak, there are guiding points or engines of the  process, and we should pay more attention to those engines, which  will ensure the further process. Even with much less effort, spending  less resources, as a result of proper organization, we can ensure a  fast process."