FLY ONE Armenia transported over 200.000 passengers in its first year  in market 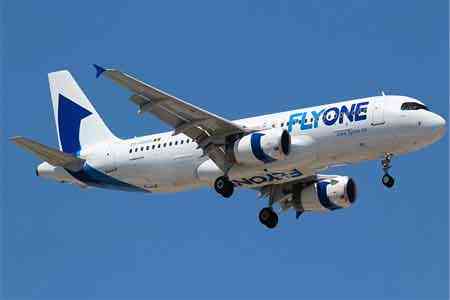 ArmInfo. Ahead of the first anniversary of FLY ONE Armenia, the airline transported more than 200,000 passengers to Armenia and back. FLY ONE Armenia Chairman of  the Board Aram Ananyan stated during a press conference.

"This is really the bar that is worth talking about," he said, noting  that the company transported about 2,000 passengers daily. Today FLY  ONE Armenia carries out air transportation in the direction of the  cities of Russia, France, Moldova, Turkey, Georgia, having the widest  geography of flights among other Armenian air carriers.

According to Ananyan, this winter the company intends to add 2 more  Russian destinations - Yekaterinburg and Mineralnye Vody, as well as  2 European destinations, which will be announced in the coming weeks.

In addition, as the head of FLY ONE Armenia noted, the airline is  making serious investments in the development of human capital.

In this regard, he stated that the company is open to cooperation  with universities in the context of flight crew replenishment. "And  in this regard, we have progress - today we can train personnel in  accordance with the best international criteria," he stressed.

FLYONE ARMENIA (www.flyone.am) was founded in 2021. On  October 27,  2021 The Civil Aviation Committee of the Republic of Armenia issued  an aircraft operator certificate to the company. The company received  the two-digit IATA 3F code and the three-digit ICAO FIE code.  The  airline's fleet consists of Airbus A320 and Airbus A319 family  aircraft.  The company operates as the Armenian division of FLYONE  (www.flyone.eu). The company   launched its operation in 2016 in the  Republic of Moldova and currently the company is one of the leaders  in the aviation market in the region. FLYONE has repeatedly been  included in the EMEA (Europe, Middle East and Africa) categories in  the TOP 10 most punctual companies.

All FLYONE ARMENIA tickets, including additional services, can be  purchased on the website www.flyone.am or through a mobile  application that is available on the Google App or App Store, as well  as at the offices of all partner companies.