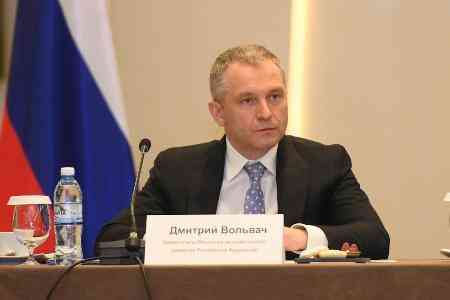 ArmInfo.The Moscow International Currency Exchange (MOEX) started direct trading of the  Russian ruble-Armenian dram (RUB/AMD) currency pair in July alone,  and if at the very beginning of trading these were insignificant  amounts, then in just a few weeks the volumes increased more than  1000-fold. Deputy Minister of Economic Development of the Russian  Federation Dmitry Volvach stated this in an interview with the Public  Television of Armenia.

He stressed that this is about hundreds of millions of transactions  carried out daily in these currencies.  "This means that the business  of both Russia and Armenia needs liquidity in these currencies, since  through them real export and import contracts are paid, or mutual  investments are made," the Russian official said.

At the same time, Volvach stressed that the current restrictions and  challenges should be used for faster growth and development of the  economy.  .  It should be reminded that on June 27, Armenian dram  trading started on the currency market of the Moscow Exchange. As  noted in the message of the press service of the Moscow Exchange,  spot and swap instruments for the following currency pairs will be  available to trading participants and their clients:  Armenian  dram/Russian ruble (AMD/RUB), US dollar/Armenian dram (USD/AMD).