Armenia`s GDP growth to be double-digit in 2022 - Economist 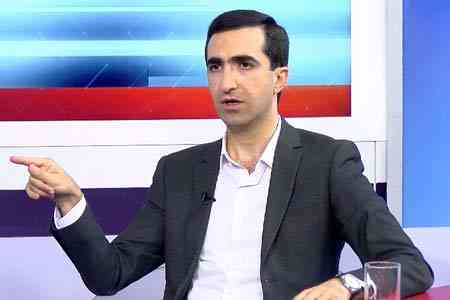 ArmInfo. Despite the aggression unleashed by Azerbaijan on the sovereign territory of  Armenia since September 13, the growth of the Armenian economy by the  end of 2022 may almost double the 7 percent figure envisaged by the  state budget.

Head of the Chair of Management and Business at Yerevan  State University Karlen Khachatryan made such forecasts in an  interview with an ArmInfo correspondent.  According to him, such a  forecast is conditioned by the current trends of the economy, that  is, a significant increase in economic activity in January-August at  the level of 13.9% and the continued inflow of relocators and their  capital into the country.

"Yes, it should be accepted that this significant growth is largely  due to external factors - the Russian- Ukrainian conflict, as a  result of which since March of this year, a large number of business  relocators have arrived and continue to arrive in Armenia, which  stimulates the inflow of a significant amount of capital", the expert  emphasized, referring also to the emerging structure of economic  growth, in particular, to the fact that in January-August 2022, the  lion's share of GDP growth accounted for the service sector- 27.1%  and the trade sector - 13.6%.

The military aggression of Azerbaijan against the sovereign territory  of Armenia could have its negative impact on the growth rate of the  economy, however, according to Khachatryan, the expected increase in  the influx of Russian citizens due to the partial mobilization  announced in Russia since September 21, as well as the fact that the  conflict between Russia and Ukraine, most likely will not be resolved  in the coming months, suggests that the positive momentum in the  Armenian economy will be maintained. "At this stage, this factor  prevails over the possible threat of war in the RA," he pointed out.

At the same time, according to the expert, partial mobilization in  the Russian Federation, which indicates an escalation of tension in  relations with the West and, as a result, a more critical situation  in the Russian economy, will negatively affect both the volume of  remittances of individuals and the volume of foreign trade. <In the  structure of Armenia's foreign trade, the share of the Russian  Federation accounts for almost a third of export-import, and  transfers from the Russian Federation make up about 45%. However,  since the movement of capital from Russia to Armenia will be largely  provoked by the mass arrival of Russians who evade mobilization, this  will lead to an increase in demand in certain areas, which will  positively affect the Armenian economy, given its small volumes>, the  economist explained.

As a result, an increase in demand will certainly increase  inflationary pressure, the expert notes. But at the same time, it  will contribute to the revaluation of the dram, which will restrain  inflationary rates. As a result, according to the expert's forecasts,  by the end of 2022, inflation in Armenia will reach 10% with a  plus/minus 1% deviation.

However, as the expert noted, the current "comfortable" environment  for Armenia's economy is still temporary, because growth is not  supported by systemic development and institutional shifts, but is  only the result of coincidence of random factors. "After the end of  the conflict, Armenia may find itself in a diametrically opposite  situation, since this time period is not used by the RA authorities  to form reserves and "airbags" and is not accompanied by key reforms.  The government observes the dynamics of the economy under the  influence of external factors only from the outside," Khachatryan  noted.

As the economist notes, against the backdrop of the devaluation of  the US dollar, the government could not get enough of the fact that  this leads to a decrease in inflationary pressure on the economy.  Meanwhile, this jeopardized Armenian dollar exports, making it  uncompetitive in foreign markets. "It turned out that the authorities  preferred a reduction in inflation in the short term to the potential  of the export-oriented sector in the long term, which is fraught with  problems for the Armenian economy over the next 1.5-2 years," he  noted. In the meantime, the authorities had to develop targeted  mechanisms to support the sectors most affected by the revaluation of  the dram.

In addition, according to Khachatryan, against the backdrop of rising  inflation and a decrease in the purchasing power of the population,  the Cabinet of Ministers had to develop targeted support and  incentive programs. "Yes, inflation is inherent in the whole world  today. However, as world practice shows, many countries are indexing  pensions and benefits, and additional funds are directed to support  socially vulnerable groups. In our case, nothing of the kind was  done. The authorities only announced that pensions will be increased  by 3 thousand drams from September 1. It is obvious that a 7%  increase in the minimum pension does not make any difference if the  Central Bank of the country itself forecasts a y-o-y  inflation of  10.3%," Khachatryan said.

At the same time, the economist does not believe that the reluctance  of the Armenian government to index pensions and benefits and  implement other support programs is due to the fear of overheating  the economy and the inability to service increased social spending,  which, in the absence of current external impulses, in the future may  lead to a sharp increase in the budget deficit and debt load. "The  current government almost doubled the public debt over the course of  4 years, which today is close to $10 billion. At the same time, the  executive branch did not even think about how to "tighten its belts",  for example, to reduce bonus payments and maintenance costs state  apparatus. Therefore, it is unreasonable to talk about the caution of  the current Cabinet of Ministers regarding the increase in the state  budget deficit and the size of the state debt;" the  Head of the  Chair of Management and Business at Yerevan State University  concluded.