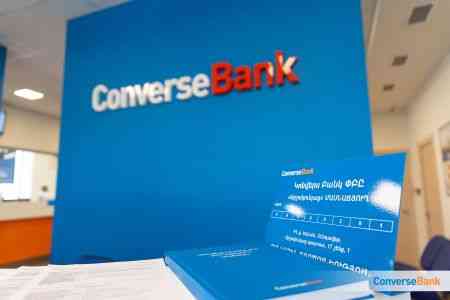 ArmInfo. On November 22, Converse Bank will start the primary placement of the next issue of USD and AMD  bonds in the amount of AMD 3 billion and USD 10 million.

According to the source,the decision to issue and place these  tranches was made by the Board of Converse Bank on March 24, 2022,  and the decision of the Board of the bank followed on November 9,  2022.

It should be reminded that in April 2022, Converse Bank also issued  one tranche of AMD and USD bonds in the amount of 2 billion drams and  $10 million, with a coupon yield of 10% and 4%, respectively.   Payments on the coupons of these issues are made every six months.   It was planned to complete the initial placement of these issues on  September 30, but it was possible fully place them two months ahead  of schedule - by July 26.  Full redemption of the bonds of these two  issues is scheduled AMD - on April 18, 2024, USD - on April 18, 2025.   Later, in October 2022, Converse Bank redeemed one tranche of USD and  AMD bonds in the amount of $5 million and AMD 1 billion, making  coupon payments for a total of AMD 100 million. These two tranches of  bonds were placed by the bank in 2019 under the following conditions:  the annual yield on AMD bonds was 9.5%, on USD bonds - 5.25%; the  term of circulation in both cases was set at 36 months; Coupon  payments were made every six months.  At the same time, the Bank  reported that corporate bonds issued by it are one of the most  demanded banking products. Since 2017, Converse Bank has issued bonds  with a total volume of 11 billion drams, $55 million and 5 million  euros, of which, as of the indicated date, bonds worth 5 billion  drams and $20 million were successfully traded on the Armenian Stock  Exchange. And the income received by buyers from bonds amounted to as  of 10/18/2022 about 1.8 billion drams, about $5.1 million and almost  598 thousand euros. In the same message, the Bank noted that from now  on it will carry out regular emissions in order to meet the  investment needs of clients in financial instruments.

According to the Financial Rating of Armenian Banks as of January 1,   2021, prepared by ArmInfo IC, Converse Bank raised funds in the   amount of 21.5 billion drams ($41.2 million) from the placement of   its own bonds. Converse Bank holds the 4th position in terms of the   volume of attracted funds from the placement of its own bonds.  It  should be noted that Converse Bank has been operating in the   Armenian market since September 1996. As of January 1, 2021, the   Bank's shareholders are Advanced Global Investments LLc (hand of   Eduardo Ernekyan) - 72.89%, HayPost Trust Management B.  V.-22.11%,   and the Cathedral of the First Cathedral of Etchmiadzin - 5%.