Robert Khachatryan: Satellite Control Center in Armenia to be ready  by the end of the year 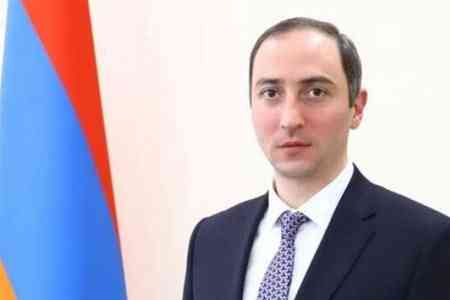 ArmInfo. The establishment of the Armenian Near-Earth Satellite Control Center will be completed by the end of this year. Minister of High-Tech Industry of Armenia  Robert Khachatryan announced this on November 18 during a press  conference.

In particular, the minister said that a working group would arrive in  Armenia in the near future to deal with the installation work. He  also noted that most of the necessary equipment has already been  delivered to Armenia, and the relevant specialists are undergoing  retraining.

<This center will allow us to easily control the satellite from  Armenia through our specialists, which is a great progress. Our main  goal is to develop the capabilities of space technologies>,  Khachatryan said, noting that there is already great interest from  Armenian companies in the context of getting involved in these  processes. In this regard, he noted that there are more than 10  companies in Armenia that are somehow connected with space  technologies.

It should be reminded that on May 25, 2022, at 22:35 Yerevan time,  Armenia's first space satellite was launched into the Earth's orbit  on a SpaceX spacecraft from Cape Canaveral in the United States.  As  Armenian Prime Minister Nikol Pashinyan noted during a government  meeting, this happened thanks to the cooperation between the Armenian  state Geocosmos company and the Spanish Satlantis.  As the PM   stressed in this context , "one of our priorities is the localization  of space technologies in Armenia, as well as organization of space  equipment production." The prime minister said that "by the end of  2023, a satellite control center-receiving station will be  established in the Republic of Armenia, around which a scientific  team of specialists will be formed. ne of the main functions of the  control center is to control the satellite and receive space photos.  It is planned that the receiving station will provide satellite data  transmission services also to other satellite operators."