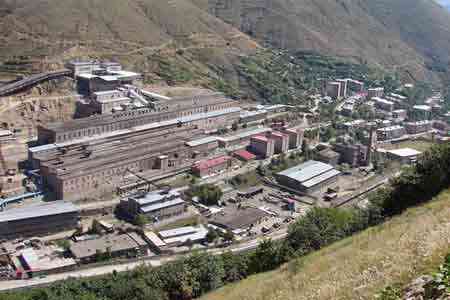 ArmInfo. The largest mining enterprise in Armenia, Zangezur Copper Molybdenum Combine,  presented its first ESG report today. The event, organized by the Union of Miners and Metallurgists of Armenia, took place at the Polytechnic University of  Armenia and was dedicated to the 70th anniversary of the  establishment of the ZCMC.

The conference raised issues related to the priorities of sustainable  development of the mining industry in Armenia, as well as global  challenges and trends in subsoil use. <It is encouraging that the  management of the Combine welcomes any initiative aimed at developing  the community, and that the relationship between the community and  the Combine is constructive and effective. The role of the plant in  creating jobs in the country is indisputable. Thanks to the company's  activities, thousands of citizens are employed," Minister of  Territorial Administration and Infrastructures Gnel Sanosyan said in  his speech, noting the importance of discussing issues of sustainable  development, environmental and social responsibility in the industry.

"The mining industry accounts for an average of 40% of Armenia's  exports. Moreover, according to the results of the first nine months,  the industry provided about 20% of budget revenues. ZCMC paid about  130 billion drams in taxes. That's more than the next six largest  taxpayers combined. Good governance, maintaining stable and  constructive industrial relations, as well as taking environmental  and social issues seriously are now key issues to be addressed by  responsible companies.

Therefore, ZCMC pays the most serious attention in its activities  and will always pay attention to the abovementioned aspects>, Roman  Khudoli, CEO of the plant, president of the GeoProMining group of  companies said.

It was noted at the conference that this report on sustainable  development was prepared under the former management of the Combine,  but the new management of ZCMC decided to publish it, taking it as a  starting point. From now on, the company will submit an annual  sustainability report.

It should be reminded that GeoProMining Group of Companies, one of   the largest industrial investors in Armenia, has been operating in   the country for 15 years. The Armenian assets of the group consist of   the Sotk Gold Mine, the Ararat Gold Mining Plant and the Agarak    Copper-Molybdenum Combine.  Over 15 years of operation, the group  has  invested more than 400 million US dollars in the modernization  of its  Armenian enterprises. The amount of the Group's social  investments in  the development of the regions where it operates  exceeds USD 10  million.  In September, Industrial Company managed by  GPM Group, acquired a 60%  stake in the flagship of the mining  industry in Armenia, the Zangezur  Copper-Molybdenum Combine,  transferring a 25% stake from its share to  the Armenian government,  the management of which was transferred to the Armenian National  Interests Fund (ANIF) in January 2022, while maintaining the right of  state ownership.