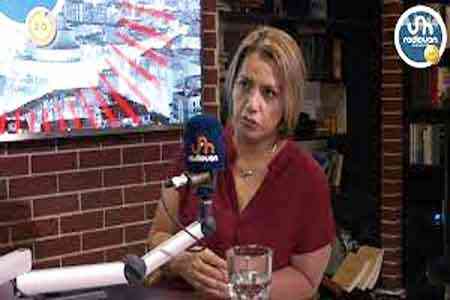 ArmInfo.Bringing the share of electric energy generated by renewable energy-generating facilities up to 15% in Armenia's total energy output is quite  realistic, Astghine Pasoyan, Director of the Foundation to Save  Energy, said in an interview with ArmInfo.

Armenia has a solar, wind and geothermal energy potential. And  applicants for licenses for construction of energy-generating  facilities had to "queue up." However, renewable energy development  has to be modeled so as to consider both near-term economic growth  outlook and market response, especially in the context of market  liberalization.

The government-proposed guaranteed purchases of electric energy from  the aforementioned energy- generating facilities at fixed tariffs  have created a rather attractive environment, with the private  sector's active involvement. The solar power producers have until  recently received guarantees for up to 20 years.

The formula poses risks involving the compulsory purchase  requirements in effect for the Electric Networks of Armenia CJSC. On  the other hand, investors prefer the construction of solar power  plants in the territories they could purchase, which, however, are  not the most advisable in terms of meeting the demand and available  infrastructure. On the other hand, market liberalization could enable  the producers to find consumers, while consumers could make a choice.

"No country is the world is yet meeting its energy demand by using  solar or wind power alone, and Armenia is not an exception," Ms  Pasoyan said. The tariffs set by nuclear power plants include the  economic cost of potential risks. "God forbid a nuclear reactor  accident, who is going to compensate the country for the damages?"

Such developments imply the government will cover the costs. "The  government would compensate for the damage caused by such an  accident, cancer insurance and so on. The Fukushima Nuclear Power  Plant is a privately-owned plant, but it is the government that is  compensating for the accident-caused damage, at the taxpayers'  expense. But if this factor, as well as others, is included in the  tariff, especially given the depreciation of the currently operating  nuclear power plant, this tariff will not be competitive," Mr Pasoyan  said.

She also highlights the importance of a depreciation fund for the  construction is a new nuclear plant.  Construction of a 1,000 MW  nuclear power plant worth a total of $8bln is being actively  discussed, as such factors as seismic stability, mountainous terrain,  etc. are considered as well.

"The government has no such resources at its disposal and can only  attract them as loans. However, it implies repayment of loans, which  will be possible if Armenia's national debt does not exceed 50% of  the GDP. With its $12bln GDP, Armenia's national debt is $10bln.  Under the circumstances, lending to Armenia means debtor's prison for  the country, with no prospect of getting out of it. The country's  economy will not even be capable of serving the interest rates. That  would be tantamount to lending a scholarship student the money to  purchase a Ferrari or Lamborghini.

"Under the circumstances, attracting such huge funds for a new  nuclear power plant would mean 'a loan prison' for Armenia," the  expert said. Constructing a nuclear power plant (1,000 MW) is only  possible if Armenia will be able to export huge amounts of electric  energy, which is an open question with Turkey and Iran constructing  their own nuclear plants to cover their energy deficit in the near  future," Ms Pasoyan said.

She also points out the problem of nuclear waste recycling. "It is  unclear what can be done, especially given the country's small  territory. Such large states as Russia and Kazakhstan can afford it,"  the expert said.

Ms Pasoyan also points out the risk of replacing nuclear plans with  thermal power ones, and NPP need refueling once a year. The expert  community views the construction of a 500 MW plant as a way out of  the situation.

As regards Armenia exploiting its own potential, including such  projects as Meghri, Lori Berd and Shnogh hydros, which could also be  classified as renewable energy projects, the expert reported debate  has been held. Armenia's government believes that all the three  projects require private investments. But one thing is clear: the  power-generating facilities in question would play an essential role  in enhancing Armenia's energy security, as their operation requires  only water. The possibility of designing storage plants should be  considered as well.

Elaborating on the activities of the Foundation to Save Energy, Ms  Pasoyan said it is actively working with Armenia's communities.  EU-granted 781,000 Euros were used for constructing solar power  plants in Aparan and Artik. The energy surplus is sold to electric  networks, with the received funds directed to the extra-budgetary  fund for implementation of other projects.

A commercial project was implemented in Artik. A licensed 600 kw  solar power plant was constructed in the town, with the energy  surplus sold to electric networks and received funds directed to the  revolving fund thereby covering the local budget deficit. The town's  share in the project was 20%, with the EU's share being 80%.

"This is the first community-owned power plant in the country capable  of ensuring monthly budget revenues totaling AMD 3mln. The funds will  be directed to further development of renewable energy in Artik.  Under an agreement with the Ministry of Territorial Administration  and Infrastructure, as part of the Covenant of Mayors - Demonstration  Projects (CoM-DeP), this project could be a model for the entire  country," Ms Pasoyan said.