On December 1, Ameriabank to start initial placement of next tranche  of USD bonds in amount of $10 million 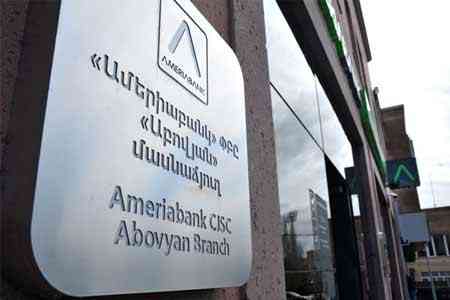 ArmInfo. On December 1, Ameriabank will begin the initial placement of the next tranche dollar  nominal,  coupon-non-documentary bonds with an  issue volume  of $10 million.

This is noted in the issue prospectus posted on  the website of the Central Bank of Armenia, according to which the placement of this issue is scheduled to be completed on  February 10, 2023. As part of this tranche, 100,000 bonds with a par value of $100  will be issued. The coupon yield is set at 3.75%. The frequency of  coupon payments is provided once a quarter. Full repayment of this  tranche is scheduled for December 1, 2024.

To purchase bonds of this dollar tranche you can transfer funds to   the appropriate account opened with Ameriabank  -1570043100494501.

The decision to release this tranche was made by the Board of  Directors of Ameriabank on February 22, 2022, and the subsequent   decision of the Bank's Directorate followed on November 24, 2022.

It should be noted that in 2022, Ameriabank issued the previous  tranches of dollar bonds on February 14, July 14 and September 7 with  issue volumes of $8 million, $5 million and $10 million respectively,  the coupon yield of which was set at 3.5% and 3.75% respectively. The  bonds of these issues are already listed on the Armenian Stock  Exchange. Full redemption of these issues will take place in 2024  (May 14) and in 2025 (July 14 and September 7).

According to the ArmInfo Financial Ranking of Armenia`s Banks,     Amriabank ranks 2nd in terns of funds received attracted from the     placement of corporate bonds - 99 billion drams or $243.1 million. In   2019-2022, the bank doubled this figure. Ameriabank's share in the   total volume of this indicator in the banking sector was over 26%.   Ameriabank is very active in the Armenian corporate bond market,   having started issuing its securities since March 2016, and in the   same year, initiating the first issue on the international market -   in June through its investment manager, responsAbility Investments AG   - successfully placed $20 million in debt securities in 4 Luxembourg  investment funds.  Ameriabank has been repeatedly recognized as the   "Best Custodian - Account Operator of the Depositary System in the   International Securities Market".  The bank is rather   active in   Armenia`s corporate bond market, as it started issuing its securities   in March 2016 and initiated the first issue in the   international   market - in June 2016, through its investment   management company   responsAbility Investments AG, the bank   successfully placed its   debt securities to the amount of $20mln at   four investment funds in   Luxemburg.  Ameriabank has repeatedly been   named Best Account   Operator-Custodian of Depository System in Foreign   Securities   Market.  Ameriabank has been working in Armenia`s market  since    October 31,  1996, and is a universal bank delivering investment,    corporate and  individual banking services as a package.  As of   October 1, 2021, the  bank`s stockholders were Imast Group (CY)   Limited (previous named  Ameria Group (CY) Limited - 48.9%), EBRD -     17.3%, Asian Development  Bank - 13.92%, ESPS Holding Limited -    11.97% and Afeyan Foundation for Armenia Inc. - 7.48%.