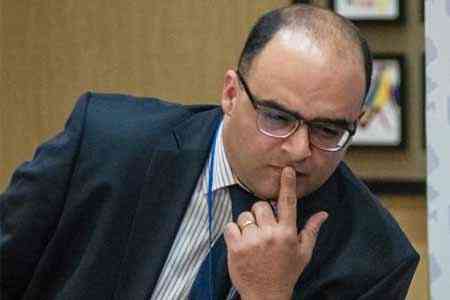 ArmInfo.The statements on the need for a North-South international transport corridor via Armenia regular made in India fit in with the geopolitical  developments in the Greater Middle East, Vahe Davtyan, a PhD in  political science and expert in transnational infrastructure project  development, said in an interview with ArmInfo.

First of all, it is the geostrategic rivalry between India and China.  Although it is not so obvious now, it has a great potential for  growing in the context of India's high geopolitical ambitions. Both  the states are seeking Asian leadership, which is reflected in  transport and logistics as well. Specifically, the motives behinds  New Delhi's statements should be looked for in the traditional  confrontation between the India-Armenia relations and  Azerbaijan-Pakistan relations. Chabahar Port located in southeastern  Iran is supposed to ensure sea communication with the port of Mumbai,  with an Iranian-Indian free economic zone to be established there. On  the other hand, China is actively supporting the Gwadar Port project  in Pakistan, which is viewed as the main rival to Chabahar Port.

Given the Indian-Pakistani conflict and, on the other hand, the  constantly developing Azerbaijani-Pakistani relations, it is clear  that New Delhi's position aimed at its principal rival Pakistan  rather that at Azerbaijan.  The expert points out a number of  advantages Chabahar Port has over Gwadar Port, with its major  advantage being, perhaps, the fact that the international sanctions  against Iran are not affecting the project in the context of its  strategic importance for transport communication with Afghanistan.

Of importance is also the fact that it is not only India and Iran  that are parties to the agreement on the North-South corridor. Among  the parties are also Russia, Kazakhstan, Belarus, Oman, Syria,  Armenia and Azerbaijan. And the geography of the corridor is  determined by all of them. By and large, the goal of the project is  communication of the North Sea with the Indian Ocean. The parties to  the agreement decide on the route, and since Azerbaijan and Turkic  Kazakhstan is among them, a 'pro-Armenia' decision is unlikely to be  easily made.

Mr Davtyan notes that a year ago the first container train traveled  from Saint Petersburg to Mumbai via Azerbaijan. In this context of  interest are the latest statements by the Iranian minister of energy  on planned energy transfer between Iran, Armenia, Azerbaijan and  Russia. "We are, in fact, witnessing a revision of the strategy of  the North-South electric energy corridor Iran-Armenia-Georgia-Russia,  which has been pushed forward since 2016," Mr Davtyan said.

However, even if a positive decision on geoeconomic configuration is  made in Armenia's interests, the question is whether Armenia with its  transport infrastructure is prepared for that. Most likely it is not.  The problem is primarily the construction of the North-South  motorway, which is progressing at an inadmissibly slow rate. That  motorway would make Armenia more attractive in terms of multi-modal  communication between the Persian Gulf and the Black Sea, which, in  turn, would make the country a full-fledged actor in the regional  transport architecture.