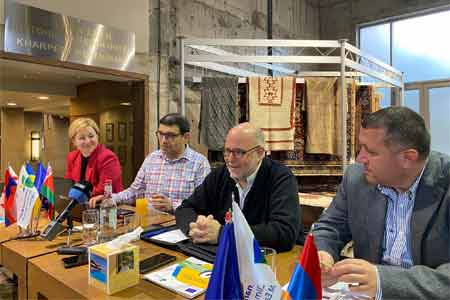 ArmInfo.Over a half of Armenia's population is living in the communities actively involved in the Covenant of Mayors East (CoM East) project, Mr Christophe  Frering, CoM East Team Leader, told reporters on Friday.

Fourteen Armenian communities are actively involved in the project.  Twenty-eight communities signed the Covenant of Mayors, but half of  them have not since taken practical steps to accomplish the tasks. So  their membership has been suspended. Communities are supposed to  honor their commitments, he said.

Covenant of Mayors East (CoM East) is the EU-funded project aimed at  introducing the EU climate and energy initiative to the Eastern  Partnership countries. CoM East supports local authorities in  implementing sustainable energy policies, improving the security of  energy supply, and facilities their contribution to climate change  mitigation and adaptation.  The signatories commit themselves to  submit development projects within two years. Otherwise, their  membership will be suspended. Under the project, municipality staffs  are trained to develop projects aimed at reducing CO2 emissions. The  EU's share in project financing is 80%, with communities' shares  being 20%.  The signatories committed to reduce ??2 emissions by 30%  by 2030 and enhance resilience by adapting to the impacts of climate  change and undertaking a climate change risk and vulnerability  assessment.  The work is aimed at capacity building to strengthen the  expertise of Covenant National Coordinators (CNC), Covenant  Territorial Coordinators (CTC), Covenant Supporters (CS) and  Signatories in the field of energy and climate policies.  Artem  Kharazyan, National Expert at EC Covenant of Mayors East Project,  said the project was launched in 2008 and entered its active  implementation stage in 2011.