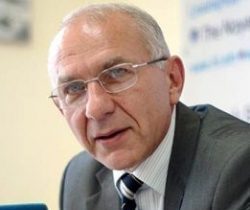 Representatives of numerous IT companies of the country, NGOs, experts and foreign guests participated in the forum, during which timely issues, related to cyber and information security, mechanisms of control in the internet, cooperation between the state and internet community were discussed.

Secretary of IGC Grigoriy Saghyan informed in a talk to ArmInfo's correspondent that the development rates of internet are so high nowadays that neither bureaucratic government system nor legislation keep up with it. The attempts to control internet fail as usual, even in conditions of the so called vertical control people get round any restrictions. According to the specialist Armenia has chosen horizontal democratic model in the issue of internet control, which is a mixed system of governance via involvement of private sector, NGOs and academic institutes.  According to Saghyan interagency Internet Governance Council formed by the government's decision in August 2014 has developed a plan of actions including solving a number of tasks related to child protection in internet space, protection from ddos attacks, work of on-line casinos.

"The principles of internet governance developed and approved by the Council are rather progressive and balanced but it is still not clear how successful they will be used. Importantly, model of "neutral network" has been chosen as basis for these principles, this means the network is neutral to the information passed through it", the specialist noted, stressing that Public Services Regulation Commission is guided by these fundamental principles in its work. In Russia and in a number of other countries, which have not signed or revoked their signatures from the Budapest Convention on Cyber Crime signed in 2006, there are other rules, according to which network operator can involve in the process for controlling and bearing responsibility for the content. According to Saghyan, considering that Armenia and Russia are very integrated including in legal framework, different approaches may be in the given field and the Internet Governance Council could provide consultative assistance for solving arising contradictions.

Touching upon the issue of cyber and information security the expert stressed the existence of a great number of problems in this field. "This is a very complex issue and that is why we have discussed it at the forum. Information security envisages both uninterrupted network operation and control over content.  Cyber-security is work for ensuring network operation without control over its content. Armenia has security concept, which envisages control. It has been developed by the Security Council and signed by the President but no practical steps have been taken yet unlike the convention on fighting cyber crimes. That is why the main question is whether it is necessary to involve operators for controlling content in the process of ensuring security. This is practiced in Russia and is not practiced in our country. And I hope it will not for a number of reasons. This will have negative impact on the country's ranking, as Armenia is considered a free zone of Internet, this means it has an attractive status which it may lose with all the unwanted consequences", the expert summarized.