Armenia is an example of successful integration, demonstrating positive dynamics on the overall negative background 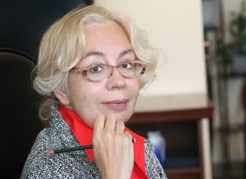 ArmInfo. Despite the negative  trend of the overall trade turnover in the Eurasian economic space in  2016, which declined by 6.7%, Armenia increased export deliveries to  the markets of the countries of the Union by 53%. About this 6July,  at the roundtable "Republic of Armenia: 2 years in the EAEU", said  the Minister for Integration and Macroeconomics of the ECE Tatyana  Valova, noting that the growth was recorded, in particular, on  important indicators for Armenia.

In this regard, she noted agricultural products, stressing that the  supply of Armenian grapes to the EAEC increased 5.9 times, tomatoes -  10 times. The registered positive trends, according to the expert,  are related to the growth of industrial production in Armenia, which  increased by 6.7% year-on-year, which exceeds the average for the  Union. The ECE Minister noted that a similar trend continues this  year. In particular, the volume of mutual trade in the I quarter  increased by 38.4% to $ 102.5 million, exceeding the level of 2014 by  49%, and three times the level of 2015. The industrial production of  Armenia, according to her, for this period increased by 16.2%  compared to the same period last year. T. Valova emphasized that  Armenia occupies one of the leading positions among the EEA countries  in terms of GDP growth - 6.7% (6.5% in the press release, 6.6% in the  statistical data). "It can be said that these figures show that  Armenia has received a one-stage effect from integration into the  EAEC and the Customs Union, which other member countries have been  receiving for several years," she stressed.

Speaking about the 4% decline in Armenia's exports to the EEA,  recorded in April this year (against 25% growth for the same period a  year earlier), Gross explained: "It is possible that the decline  occurred in those positions where a large Growth, due to which the  demand for exports fell. Do not absolutize statistical data.   However, Russia continues to act as the traditional partner within  the Union for Armenia. In particular, the share of the RF in the  overall structure of Armenia's exports exceeds 20%, while Belarus  accounts for 1%, Kazakhstan - 0.2%. Answering the question of  ArmInfo, Gross stated: "Yes, the share in the structure of the  overall trade turnover does not change, but the dynamics itself is  impressive. Barriers are gradually eliminated and today's figures  testify to this. " In this regard, she said that in 2016 the volume  of Armenia's supplies to Belarus increased 2.1 times, to Kyrgyzstan  2.8 times, to Kazakhstan 3 times.  Summarizing the results of  Armenia's membership in the EAEC for 2.5 years, Gross noted that  Armenia's accession was for an exceptionally difficult period. "If we  did not launch the Unified Energy System, today everyone would defend  national markets, as a result of which we would face growing  protectionism and restrictive measures for mutual trade. And now,  despite economic difficulties, the markets are open, and Armenia is a  vivid example of successful integration, demonstrating positive  dynamics against the background of general negative trends, "she  concluded.