Russian MP: Restoring railway communication between Armenia and Russia through Abkhazia and Georgia meets the economic interests of Yerevan and Moscow 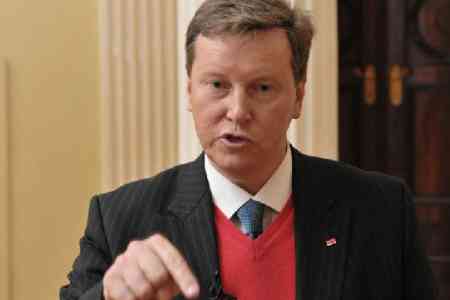 ArmInfo. The restoration of  direct rail connection between Armenia and Russia through the  territory of Abkhazia and Georgia meets the economic interests of  Yerevan and Moscow.As the "Parliamentary Newspaper" reports, during the speech in the  special project "National Environment", First Deputy Chairman of the  State Duma Committee for Control and Rules Oleg Nilov stated.

"Restoration of the railway communication between Russia and Armenia  could be in demand both in passenger transportation and in freight  transportation, including rail transportation of timber and sawn  timber, agricultural products, especially as this way gives us a way  out to the huge Iranian market," explained deputy.

According to him, the road, naturally, must pass through the  territory of Abkhazia and Georgia. Nilov believes that if take into  account the fact that Armenia and Georgia have normal relations, the  implementation of the project largely depends on the diplomatic  efforts of Tbilisi and Yerevan. "It is very important that the  railway does not arouse fears on the part of the Georgian side,  however, Russian trains to Kaliningrad have been going through  Lithuania for a long time, despite the uneasy relations with the  Baltic state." The trains run without stopping, the cars are sealed.  Such scheme may also be used here," the parliamentarian said. He is  convinced that any investments in this project will pay off fairly  quickly.

In turn, Armenian Ambassador to Russia Vardan Toghanyan stated that  Moscow and Yerevan demonstrate to the whole world an example of  good-neighborly relations, on the agenda of which there are no global  problems. "We must at least maintain such relations, take into  account our historical experience and modern realities. It is  necessary to build up military-political, economic, cultural  partnership," the diplomat stressed.

The diplomat agreed with the fact that Russia and Armenia still do  not have enough cooperation and production projects. "There is  cooperation at the level of natural monopolies in the field of gas  and energy, but we need projects, for example, in the field of  agriculture." One could attract our colleagues from Kazakhstan and  Belarus, I am sure that a railway coming from Russia can also work  for the interests of the Central Asian countries - a single Armenia  can not be the beneficiary of this economic project, but such plans  would strengthen the political component of our relations, and I  wholeheartedly support this idea," the Armenian diplomat summed up.

The former military road through the Upper Lars checkpoint since the  beginning of the 1990s was the only ground route providing Armenia's  connection with Russia. The checkpoint is periodically closed - in  the winter due to avalanches, and in the spring - due to mudflows.  Prime Minister of Armenia Karen Karapetyan talked about the need to  create an alternative to the "Upper Lars" road at a government  meeting on January 26. Alternatively, requiring a political solution  for the countries of the region, there are roads connecting Georgia  and Russia through the conflict zones of South Ossetia and Abkhazia.

In January 2013 the former Prime Minister of Georgia Bidzin  Ivanishvili considered it possible to resume the operation of the  Russian-Armenian railway, which passes through Abkhazia. Then Bidzina  Ivanishvili said that if all parties agree, it will be possible to  open the railway.

Earlier, Deputy Foreign Minister Grigory Karasin said that the  agreement on the mechanisms of customs administration and goods  monitoring between Russia and Georgia made necessary clarity on the  issue of where the customs borders of the Georgian side pass. "This  is the Kazbegi region on the border with Russia, a place south of the  Inguri River (beyond which the territory of the Republic of Abkhazia  begins) and the neighborhood of Gori (near the border with the  Republic of South Ossetia)," Karasin said in an interview with  Kommersant.

Agreements on customs administration and goods monitoring mechanisms  were reached after in 2011 the third president of Georgia, Mikhail  Sahakashvili, lifted the veto for Russia's accession to the WTO, but  only on the condition that through the territories that are not  controlled by the Georgian authorities - Abkhazia and the Tskhinvali  region - corridors from Russia would pass, as well as the parties  will invite international mediators to control the flow of goods and  their marking. The choice fell on the Swiss company SGS, with which  six years after the signing of the agreement, Georgia signed a  contract. Russia welcomed this decision, but is not in a hurry to  sign the contract.

As Georgian Prime Minister Georgy Kvirikashvili explained, the  agreement with SGS allows transportation of goods to Russia through  the Tskhinvali region, which is not controlled by official Tbilisi.

According to the research of the British non-governmental  organization International Alert, the reconstruction of the Abkhazian  railway, which has been inoperative since 1991 on the route Sochi-  Sukhumi-Tbilisi-Yerevan, will cost $ 277.5 million, which will be  repaid not earlier than in 100 years. $ 251 million is required for  the restoration of the 190-kilometer Abkhaz section of Psou-Inguri,  while from Inguri to Zugdidi, the cost will be only $ 26.5 dollars.  From Zugdidi to Tbilisi and further to Yerevan, the road works and  does not need repairs. It is noteworthy that according to the  official conclusions of the Abkhaz experts this amount is $ 350-400  million, while their Georgian counterparts believe that it will  require no more than $ 73 million.