Vardan Aramyan: Realization of "Ecology in exchange for debt" program in Armenia is primarily important for creditor countries 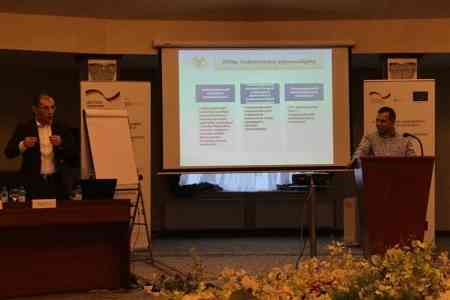 ArmInfo. Armenia is interested in the implementation of the program "Ecology in exchange for debt", not because of the problem of servicing external public debt for the country, but because environmental tasks are important for creditor countries. Minister of Finance of Armenia Vardan Aramyan stated at a meeting with journalists.

As Deputy Minister of Finance Armen Hayrapetyan explained, this process is not an instrument of concession of the national debt. Rather, it should be considered as a kind of calculation of means, since Armenia, properly servicing the external public debt, has the task of implementing environmental programs. Meanwhile, the environmental organization, where the developed countries transfer funds for environmental activities, is ready to allocate funds to the republic for solving environmental problems, but not directly. "Let's say that Japan pays the Green Climate Fund funds, but Armenia hopes for certain loans from this organization, so the parties can come to an agreement - on the one hand Armenia does not pay debts to the Japanese side, on the other - Japan does not contribute money to the Fund. This ecological program is implemented in Armenia," Hayrapetyan explained.

Vardan Aramyan reminded that the program was initiated by the Armenian side in 2006. However, as the minister noted, extreme caution must be exercised in this matter. According to him, countries that have problems with servicing the external public debt resort to this instrument. Such countries, as a rule, first turn to the Paris Club on debt restructuring. In the same place, donor countries offer them a concession of debt through the implementation of environmental programs.

However, according to the head of the Ministry of Finance, recently the following trend has been outlined:  countries that do not have problems with servicing the external debt of the state, also use this mechanism, since the environment of creditor countries is at the forefront.

As the minister pointed out, this mechanism is applicable only to bilateral debt, so it does not apply to loans from the World Bank, the Asian Development Bank, etc. In fact, as Aramyan explained, the volume of Armenia's bilateral debt is estimated at $ 360 million and mainly loans from Germany and Japan, a small part is the funds raised from Russian partners in the framework of defense and energy programs. At this stage, mechanisms for repayment are being developed. At the same time, the agreements are strictly preliminary and will be implemented in stages.

A week before, Deputy Minister of Nature Protection of Armenia Khachik Hakobyan told reporters that the RA will reduce external debt through the implementation of environmental programs and environmental projects. "We have launched a large international process "environmental programs in exchange for debt" with the potential for up to $ 570 million," the deputy minister explained. According to Hakobyan, under the leadership of the country's vice-premier, a commission has been set up to implement this process, and the World Bank, which approved the initiative, will provide technical assistance. He explained that the implementation of this initiative will also allow the implementation of many environmental programs and projects to improve the environmental situation in Armenia. "Now we are at the stage of developing procedures and a road map, which will be submitted to the World Bank, but their implementation and specific amounts that will be written off from Armenia's external debt will be known in the next 2-3 years," Hakobyan. According to him, instead of repaying part of the external debt, our country will invest in the implementation of environmental programs, improving the efficiency of water resources management, reducing carbon dioxide emissions and solving other environmental problems. Earlier, in February 2017, in a conversation with journalists, the Minister of Nature Protection of Armenia Artsvik Minasyan stated that the program is the tool that is aimed at solving environmental problems, and in no way has the goal to influence the rating of Armenia's external financial market. Nevertheless, he noted that at present Armenia has not received proposals from any country. According to the National Statistical Service, Armenia's aggregate state debt at the end of 2017 amounted to $ 6,774.6 million, an increase of 14% or $ 832.5 million compared to the end of 2016. At the same time, the external state debt of the republic at the end of 2017 was $ 5,494, 9 million, an increase over the year by 14.3% or $ 689.3 million.