Muhammedniyaz Mashalov: Turkmenistan is becoming a major transit and transport center in Eurasia 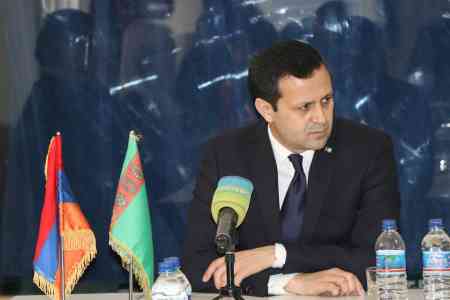 ArmInfo. The resolution "Strengthening the linkages between all modes of transport to achieve sustainable development goals" reaffirms the commitment to enhancing the role of sustainable transport in creating jobs, promoting mobility and improving the efficiency of supply chains in terms of people's access to work, schools and health services, and organizations supplying people in rural areas and cities with goods and services, so that everyone has equal opportunities, and no one has been forgotten.

The Ambassador of Turkmenistan to Armenia Mohammedniyaz Mashalov announced this at a briefing on the UN resolution adopted by Turkmenistan on February 15 "Strengthening the links between all modes of transport in order to achieve sustainable development goals".

He stressed that the co-sponsors of this resolution, initiated by the President of Turkmenistan Gurbanguly Berdimuhamedov were 74 states, which was unanimously adopted by the commonwealth of states. "This resolution calls for efforts to promote regional and interregional economic integration and cooperation, including by improving transport infrastructure planning and mobility, strengthening transport links and promoting trade and investment. The resolution also recommends that States maximize synergies in planning and development of transport corridors and infrastructure by taking into account relevant international artifacts and actions aimed at the unification of rules and technical standards", he said.

The diplomat added that the adoption of the resolution is another important step in the implementation of the initiative of the President of Turkmenistan, expressed at the 66th session of the UN General Assembly in September 2011, regarding the coordination of UN activities in the field of transport and the development of the UN Special Interregional Transport Development Program. In this regard, he recalled that this is not the first resolution of the UN General Assembly on sustainable transport adopted at the initiative of the Turkmen side. "The International High-Level Conference on the Role of Transit Transport Corridors in Ensuring International Cooperation, Stability and Sustainable Development was held in Ashgabat on September 3-4, 2014. As a result, the Ashgabat Declaration was adopted, and on December 19, 2014, the UN General Assembly unanimously adopted initiated by Turkmenistan, the resolution "The Role of Transport and Transit Corridors in Ensuring International Cooperation for Sustainable Development." Our country, relying on its neutrality based on the principles of maintaining peace and stability, ensuring sustainable economic development, improving the public welfare of people and strengthening international cooperation, always emphasizes the importance of environmentally sustainable, safe, and generally accessible transport and transit corridors," said the President of Turkmenistan in 2014.  Summing up the adoption of the resolution, it is possible to note with great satisfaction that the UN resolution, in fact, is a logical continuation of that pain which Turkmenistan has been carrying out for a number of years, creating conditions for the formation of international transport and transit corridors," Mashalov said.

And in this context he recalled that the year 2018 was proclaimed the year "Turkmenistan is the heart of the Great Silk Road", as from the words of the head of Turkmenistan "Building the new automobile and railroads, seaports and bridges, Turkmenistan in the third millennium revives the Great Silk Road". "And this concept is realized not only in the construction of large transport facilities and highways, transit corridors. Independent, neutral Turkmenistan makes a great contribution to the development and strengthening of political, trade-economic and cultural-humanitarian ties in the international arena, expanding the ideological foundation of the motto of 2018" Turkmenistan is the heart of the Great Silk Road "to comprehensive concepts and concepts of peace and cooperation for the sake of creating a better future for all mankind. In recent years, Turkmenistan has implemented such grandiose projects as the construction of a new International Airport in the capital, the first stage of the Turkmenistan-Afghanistan- Tajikistan railroad-the Kerky-Ymamnazar-Akin line. Turkmenbashi sea port, Ashgabat-Turkmenbashi highway, etc. The country creates comfortable and safe international corridors with the use of rail, road, air and waterways which ensures sustainable development of the region, building up good-neighborly relations between nations, strengthening cooperation, increasing the volume of trade turnover," the ambassador of Turkmenistan said.

He stressed that Turkmenistan is becoming an important crossroad of steel lines, a major transport and transit center in Eurasia. He stated that the Turkmen railway construction workers are actively working on laying the route from the border station Serhatabat in Mari province to the Afghan city of Turgundi. "The start of this very important project for the neighboring country was given by President Gurbanguly Berdimuhamedov on November 29, 2017, launching the construction of a railway line that opens up great opportunities for including Afghanistan in the transport and logistics system of Turkmenistan and through it - the whole region." In addition to the pipelines already introduced in Turkmenistan Several major projects have also been successfully implemented, one of these projects is the transnational gas pipeline "Turkmenistan - Afghanistan - Pakistan - India", the start of construction which was given in December last year with the participation of the President of Turkmenistan, the head of Afghanistan, the Prime Minister of Pakistan and the Vice-President of India, "Mashalov said. In this regard, he informed that on February 23 solemn events will be held related to the start of the construction of the next stage of the TAPI gas pipeline on the border of Turkmenistan with Afghanistan, the laying of the Turkmenistan-Afghanistan-Pakistan power transmission line and the opening of a new railroad along the route Serhetabat (Turkmenistan) - Turgundi (Afghanistan). "The length of the Turkmenistan-Afghanistan-Pakistan-India pipeline is approaching 1,814 kilometers, of which 214 km will pass through Turkmenistan, 744 km through Afghanistan and 826 km through Pakistan and reach the Fazilka settlement in India. It is envisaged that after full commissioning for TAPI will export up to 33 billion cubic meters of natural gas per year for 30 years, and in this context it is encouraging to note that the development of transport communications is today becoming one of the most important conditions The roads of friendship and constructive partnership, which our country builds, help to strengthen contacts in the format of such large international and regional structures as the UN, the SCO, the CIS, the BSEC The new highways created with the active participation of Turkmenistan strengthen the role of our region in ensuring sustainable development in the space of Eurasia, "concluded the ambassador of Turkmenistan.