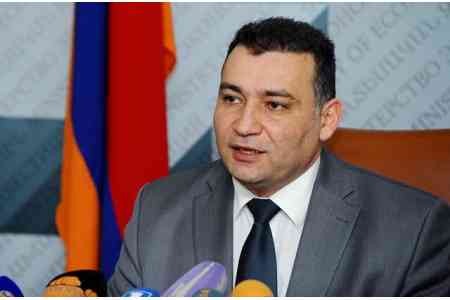 ArmInfo. The second meeting of the Armenia-US Council on Trade and Investment was held in Washington on March 19. Despite the fact that the meeting was not an extraordinary meeting, at this stage it was very relevant and extremely important - in addition to discussing the expansion of bilateral trade, economic and investment cooperation, the sides touched on the possibility of extending the GSP system, as well as import duties, by the US Congress aluminum foil in the United States. The deputy minister of economic development and investments, the head of the Armenian delegation Hovhannes Azizyan, told in an exclusive interview to ArmInfo that the system of general preferences for Armenian exporters will be prolonged, as well as what solutions the "aluminum issue" the American side offers.

The agenda of the second meeting of the Council was quite extensive.  Basically, the issues concerned the regulation of trade and investment. That is, the parties discussed not so much the mechanisms of stimulating trade and investment, as many joint activities aimed at removing technical obstacles in the sphere of trade in sanitary and phytosanitary, customs, and intellectual law. In particular, the exchange of information on the existing legal regulations in both countries, taking into account the fact that in Armenia, in connection with its membership in the EEA, a number of regulations already refer to supranational procedures. The parties agreed, through joint work, to simplify the scope of technical regulations as much as possible, and also provide the exporters of Armenia and the United States with all the necessary information regarding the documentary and procedural support of the process in accordance with the requirements of the parties. We agreed that in the event of a problem, to support exporters of Armenian small and medium-sized businesses by establishing a direct connection with government agencies or with the relevant US organization.

The parties, in particular, touched upon the issue of standardization and certification of livestock products, which will simplify the export process for Armenian entrepreneurs. American partners were invited to consider the possibility of signing an agreement on mutual assistance between the customs authorities of the two countries, in particular, to ensure the availability of information. Our main goal is to create a legal framework that is most understandable for exporters.

The Armenian delegation also touched upon the issues of improving the business environment. For Armenia, the activity of investors from the United States is important, so we tried to understand the main tasks and risks that impede the development of the process, in particular, to protect intellectual property.  Perhaps today, the volume of Armenian exports of services, especially in IT, has not reached the expected level precisely because of the risks. The Armenian side suggested considering the possibility of eliminating some restrictions on the export of goods and dual-use technologies from the US to Armenia. We think that by eliminating the requirement to license the company exporting technology to Armenia, American IT companies will be more interested in investing in Armenia's services sector.

Armenia has repeatedly stated that the use of the GSP (Generalized System of Preferences) RA capabilities in a number of countries with the highest efficiency. At the same time, the operation of the preferential system has been suspended since January 1 of the current year. Are there any hopes for an extension of the GSP preferential treatment regime?

The export of products from the RA to the United States mainly benefited from preferences within the GSP - about 97-98%. As a result, in January-December 2017, Armenian exports recorded a 70% growth and amounted to $ 68 million with a total foreign trade turnover exceeding $ 200 million. Thus, those goods that could use this regime were actually used by him for 100%. At the same time, from the end of December 2017 the GSP system was completed. In order to continue exporting goods to the United States, all countries, including Armenia, should wait for the decision to extend the regime by the US Congress, which, according to the adopted procedure, fixes the term of the preferential treatment.

To date, no decision has been taken. In this regard, the Armenian delegation addressed this issue within the framework of the session of the Trade and Investment Council, and we were assured that the decision to extend the Congress by the GSP system will be made in the near future. Economic entities that will export goods to the United States for the period from January 1, 2018 until the decision is made, will be paid paid import customs duties that are not payable under the GSP by the relevant importing companies from the United States.

According to statistics, aluminum foil traditionally holds the leading positions of Armenian exports to the US, followed by processed agricultural products, alcoholic beverages. Meanwhile, on March 23, President Donald Trump's decree on imposing a 25% import duty on steel and an aluminum import duty of 10% for purposes of "protecting America's national security" came into force on March 23, while freeing Mexico and Canada from them. Other allied countries were asked to send a request for negotiations. Nevertheless, on the night of Friday (March 23), the United States is still temporarily - until May 1, the countries of the European Union and four other allies - Australia, Argentina, Brazil and South Korea - were released from the barrage duties on steel and aluminum.

Thus, starting from March 23, the duties will apply only to half the volumes imported to the US, steel and aluminum. Armenia, represented by RusArmenal (Rusal accounts for 15% to 20% of its exports to the US market) imports aluminum foil to the US. Can the RA count on the exemption from the duty imposed by the US authorities?  In general, the import of aluminum foil in the US is subject to a fee of 5.3%.  New rates suggest an increase in costs for importers by an additional 10%. Until now, in the framework of the GSP system, Armenia exported to the US at zero customs duty. After making the decision, countries that do not enjoy preferences within the GSP will pay 15.3% - according to the scheme of 5.3% plus 10%.  Thus, in the case of Armenia, with an extension of the GSP, only an additional 10% remains.

At the same time, the decree of the US president noted the willingness to continue consultations with partners - that is, the American importing company can apply to the US authorities and ask for a cancellation of an additional 10%. At present, the mechanism of circulation has already been approved, the Armenian delegation to the United States has been provided with the necessary documents, which we, in turn, will give to the company "RusArminal". Thus, "Armenal" can, following consultations with the American partner - the importer of aluminum foil in the US, apply for the cancellation of the additional import customs duty of 10%. At least, we felt the readiness of the American side to discuss this issue.

Donald John Trump - the 45th President of the United States of America, businessman and writer, wrote in his article "How to save every penny": "When buying any product or service, do not hesitate to bargain for more favorable terms. , while being one of the richest people in the world, I trade even in the most expensive, prestigious shops.The logic is simple: the more you pay for something, the greater the discount from the price the seller can make. I consider the pride that prevents to save own den Guy, a huge folly".