Vardan Aramyan: It will be unreasonable if the government goes to revise the allowable national debt ceiling in GDP 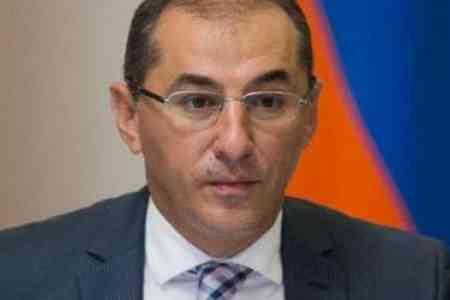 ArmInfo. The restrictions imposed in 2018 related to the legislative regulation of the ratio of public debt to GDP were not an end in themselves and the revision of these parameters is fraught with consequences. Former Minister of Finance of Armenia Vardan Aramyan expressed this opinion in an exclusive interview with ArmInfo.

Earlier, on March 19, at a large press conference, Armenian Prime Minister Nikol Pashinyan stated that in the coming days, the Armenian government together with the Central Bank and the expert community will discuss a possible revision of the acceptable threshold of state debt to GDP. The head of the Armenian government reminded that during his last visit to Brussels it became obvious that the European Union was ready to finance the implementation of development programs in Armenia. According to him, in order to take part in the implementation of the planned programs, Armenia should think about attracting additional resources from abroad. But here, as Pashinyan pointed out, there is a sensitive problem related to the legislative limitation of the ratio of public debt to GDP.

Meanwhile, according to Vardan Aramyan, proposed by the International Monetary Fund (IMF) in 2017 the Ministry of Finance of Armenia three threshold levels of public debt - 40%, 50% and 60% for the medium and long term (then Vardan Aramyan headed the Ministry of Finance of the Republic of Armenia, Ed. note) Was called upon to become guidelines for the entire debt policy of the Republic

As the expert explains, the establishment of permissible thresholds for public debt has two main objectives:  first, a very high threshold of public debt can lead to crowding out expenses from developing countries for which "debt costs more" and if they exceed 60% threshold, expenses start to grow faster than income. This was the case with Turkey when, after 2000, it began to experience crises precisely in connection with the problems of public debt. Therefore, in many developing countries, the upper permissible threshold of public debt to GDP is set at exactly 60%, and only in very few - at 70%. For Armenia, according to the recommendations of international experts, the "comfort zone" was limited to 60%.

In addition, it is necessary to remember that the state is going to increase the level of public debt in order to make capital expenditures in the long term. They should stimulate the growth of the economies of developing countries with less developed infrastructure.

Meanwhile, according to the data of the Ministry of Finance of the Republic of Armenia, in 2018 there was a relatively low rate of fulfillment of foreign credit programs - by 50-60%. These are programs for the development of road and water management, as well as projects in the energy sector, in particular, under the program for extending the service life of the Armenian NPP. In the meantime, as international experience says, it is the economies of countries with developed infrastructure that have the potential to grow, and nothing else. "But if a country does not have its own funds for investments in infrastructure projects, it should attract them from outside. In this case, it's not the increase in debt that is dangerous, but for what purposes the raised funds will go," Aramyan stressed.

In order to stick to the idea and not let "go astray," the Armenian government in 2017 initiated a change in fiscal rules. Having consulted with international experts, and on the basis of concrete logic, Armenia determined the thresholds of public debt that are acceptable for themselves. So, in case of exceeding the 40% threshold of the state debt, capital expenditures should exceed the state budget deficit. At the same time, the republic undertakes to return to a decrease in the state debt. Having exceeded the 50% threshold of the norm, requirements are tightened and, in addition to the previous requirement, restrictions are imposed on current expenses and the golden rule of debt is in place, which provides for the possibility of financing through borrowing only capital expenditures. Approaches are even more tightened after the state debt exceeds 60% of GDP and current expenditures are tied to domestic revenues. At the same time, the state undertakes to return to reducing the level of public debt, in order to form a reliable "airbag".  "Otherwise, not only is the country's ability to resist external shocks, but the number of people willing to issue cheap loans is narrowing. In this context, I urge the authorities to be extremely careful in revising the allowable threshold of public debt," the ex-minister said.

Vardan Aramyan does not agree with the thesis that any debt can generate economic growth. And the mistake is that according to the expert, speaking of the state debt, financial authorities concentrate exclusively on state budget flows, not taking into account such a macroeconomic indicator as national wealth, which includes state-owned enterprises, natural resources and the cost of infrastructures.

In 2017, initiating the process of revising the country's fiscal and budgetary rules, reminds Aramyan, the government refrained from changing the upper threshold for the national debt, including understanding that this may adversely affect investor psychology. "It would be unwise if the government today goes to revise the upper threshold of the national debt," said the former head of the Ministry of Finance. It is more correct to adhere to the existing rules, and then, if the public debt threshold is exceeded by 60%, the power to appeal to the public and the investor will lead to objective reasons for exceeding the threshold, while setting out specific dates for returning to the previous level. The last condition, as pointed out by the former head of the Ministry of Finance, may not be so crucial for the population of the country, but is of fundamental importance for the investor in the framework of ensuring macroeconomic stability in the republic. <"The idea of the fix> is as follows - to manage the state debt in such a way as to always maintain the ability to withstand external shocks," concluded Vardan Aramyan.

To recall, in 2018, Armenia revised the country's fiscal rules, setting a permissible threshold for public debt in the amount of 40, 50 and 60% of GDP. At the same time, it established that in case of force majeure situations such as natural disasters, wars, the government will be allowed to exceed this threshold. As noted then in the Ministry of Finance, in the future, new fiscal rules will tie the hands of those leaders who, within the framework of election programs, decide to increase pensions and wages. It was noted that the law acts as a kind of restraining mechanism and a yellow traffic light signal, "in order to have time to slow down and will not appear in the abyss."