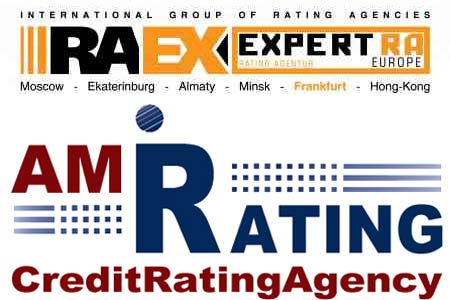 ArmInfo.Against the background of political turbulence associated with the "velvet revolution" in April-May 2018, the Armenian banking system demonstrated high reliability, maintaining a previously reached sufficient level of liquidity,  strong capitalization, healthy loan portfolio, substantial deposit  base and moderate profitability, this is stated in the regular  industry research of Armenia's banking system prepared by experts of  AmRating national rating agency in cooperation with European  Rating-Agentur Expert RA GmbH ( https://raexpert.eu/files/Industry_report_Armenia_Banks_27.05.2019.pdf ) As it is noted in the report, the new economic policy of the government, headed by the  leader of the "velvet revolution" and Prime Minister Nikol Pashinyan, differs in many  ways from the former highly corrupt system, which was built up with the existence of  the so-called "shadow economy". The new policy's significant adjustments of ingrained  economic life affected some spheres of the economy and, as a result, influenced to  some extent macroeconomic indicators.

The priority to maintain the Rule of Law, the real struggle against  corruption in the sphere of the existing informal "contracts" of the  authorities with business and against monopolies, the tough  implementation of environmental legislation for mining projects are  factors that can be characterized as the main drags of the transition  economy.  According to the experts of the agency, despite the  revolutionary events and the electoral period of 2018, the financial  authorities of Armenia managed to distance themselves from the  ongoing political processes and preserve stability in the  implementation of fiscal and monetary policies. Over the past year,  the government has slightly increased budget revenues by improving  tax administration, and the Central Bank of Armenia (CBA) has  successfully continued the policy of low-interest rates to maintain  activity in the credit market.

According to the report, in the current low-interest rates  environment and in the hope of increasing the profitability of  operations due to future economic activity, banks continue to  strengthen their positions, expanding and looking for new niches in  the low- profitable and limited retail market. In this sense, their  goals are to increase non-interest income through effective  technological solutions, products, and innovations, associated mainly  with card products and online banking services.

"The sector's liquidity position remains satisfactory, despite the  decline in key ratios in 2018, as compared to 2017. Just as in the  case of profitability indicators, we observed high disproportionality  in the distribution of liquidity", analyst f AmRating Karina Melikyan  notes. The funding base was characterized by a gradual increase in  the share of individuals' funds by 4,6p.p. up to 40,5% from 2014 to  2018, as well as a decrease in the average level of interest rates by  2,4p.p. down to 5,33% over the same period. In general, the volume of  individuals' funds slowed growth in 2018 to 9% from 20,6% in 2017,  while deposits and current accounts of corporate clients, on the  contrary, accelerated growth to 13% from 3,2% in 2017. The latter  grew partly due to the intensification of the activities of two  private foreign pension funds, and the introduction of a mandatory  accumulative retirement system in 2017.

The stable situation in the currency market of Armenia gradually  lowers the traditionally high level of dollarization of the economy.  Banks intensively increase the share of assets and liabilities in  national currency.

Meanwhile, AmRating analysts express particular concern related to  IFRS 9, as the format of disclosing information under this standard  does not provide a complete picture for assessing the quality of the  loan portfolio since the classification by risk groups is  significantly blurred. Moreover, IFRS 9 does not imply a specific  industry breakdown by risk groups, which ultimately makes it  impossible to assess the real picture of asset quality and,  accordingly, the degree of resource efficiency.

According to the analysts' forecast, it is expected that 2019 will be  a transition period and will be characterized by weak growth both in  economic activity in the country as a whole and in the sphere of bank  lending. Despite the above-mentioned imbalances that pose some  additional risks, the banking system, in the presence of substantial  cushions of capital adequacy and excessive liquidity, will continue  to operate in a stable manner even in the event of unforeseen  external shocks. The guarantees of the functioning in the transition  period were laid down in the IMF policy, which has recently approved  a credit line as part of a preventive stabilizing three-year standby  program for a total of around USD 248,2 m.

As AmRating Director Emmanuil Mkrtchyan notes, the overall domestic  political and economic situation in Armenia by the beginning of 2019  is still characterized by a "general turbulence" with uncertainties  and restrained optimistic expectations.  Nevertheless, the  intensification of international donor interest in the programs and  ideas of the government, the political will to transform against the  background of lack of management experience, allow to characterize  the year 2019 as a period of accumulation of the potential for  further qualitative new movement towards increasing the  competitiveness of the Armenian economy.

To note, AmRating is an affiliated company with ''Agency of Rating  Marketing Information - ArmInfo'' and has 12 years of experience in  the market of financial analytics, reviews and credit ratings.

Rating-Agentur Expert RA GmbH is a European division of an  international group of RAEX rating agencies with more than twenty years of experience in the rating industry. The agency is accredited  by the European Securities and Markets Authority (ESMA) and has the  official status of an External Credit Assessment Institution (ECAI).