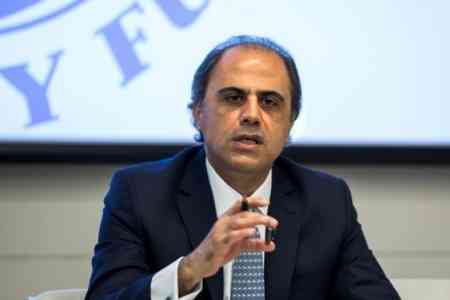 ArmInfo. Jihad Azour, Director of the Middle East and Central Asia (MCD) Department at the International Monetary Fund (IMF), has recently visited Armenia. He is a well-known Lebanese economist and politician, who served as Lebanon’s Minister of Finance under Fouad Saniora’s government from 2005 to 2008, and author of a number of critical reforms in Lebanon's public administration and taxation system.

It is noteworthy that the mission has had meetings with the leadership of the country's economic sectors and discussed a range of issues related to future reforms in the country's socio-economic life, development of inclusive institutions, the fight against corruption, tax transformations, update of the Financial Sector Assessment Program (FSAP), and preserving macroeconomic stability. Despite his busy schedule, Jihad Azour kindly agreed to answer the questions of journalists.  Below we present the answers of the senior representative of the IMF to the questions of Emmanuil Mkrtchyan, General Director of ArmInfo.

- Mr. Azour, in May the IMF approved a three-year Stand-By Arrangement for Armenia amounting to about $ 248.2 million. One-seventh of this amount was made available immediately, and the remaining amount will be made available subject to six semi-annual reviews. Moreover, as was stated, these amounts had not been transferred to the Central Bank’s account, but rather provide assurance, a kind of ‘insurance line’ if Armenia confronts severe shocks at this turbulent time for the global economy and trade. Meanwhile, the program as such provides for the country’s commitments to carry out serious reforms in line with the new government’s ambitious program, which is aimed at drastic transformation of the socio-economic life. Does the IMF have first assessments of the ongoing reform process and in your opinion, what are its strengths and weaknesses?

Let me first say a few words about the regional outlook and forecasts. Currently, we are updating our April report (https://finport.am/full_news.php?id=38164&lang=2) on the economic outlook of the CCA region at the IMF, and the update will be issued in October. I would like to note that the Caucasus and Central Asia region, like other regions in the world, is affected by developments in global economy including the challenging global trade situation. And this impact materializes through linkages with major trading partners. In addition to these global trade challenges, economic tensions in the Gulf States can affect the economic situation in the CCA countries. Nevertheless, we believe that during 2019 the economic growth in the region will be stable and in line with our latest forecast produced in April (at 4.1% - Ed.).

However, a growth rate of 4-4.5% is not sufficient for sustainably addressing the challenges facing the countries of the region, especially in terms of their inclusive development, job creation and providing the necessary level of social protection for the population. As for Armenia, we reached agreements with the authorities of your country in February aimed at supporting the ambitious structural reform program. According to this program, we will only disburse the funds if necessary, in the event of shocks affecting the country. By providing such an access to these concessional resources, we attempt to promote resilience and sustainable economic development in the country.

On the one hand, the IMF is trying to secure future macroeconomic stability, which was also the goal of all previous IMF-supported programs, and on the other, from a macroeconomic perspective, help the country reduce gradually the level of public debt to below 50% of the country's GDP in a growth-friendly manner. At the same time, the program aims at building higher economic resilience to shocks by promoting creation of new institutions of inclusive development and protection of the most vulnerable groups of the population.

Structural reforms are, of course, the key pillars of the program. They include the reforms that are planned by the Armenia’s government, namely, to fight corruption and create an effective and strong governance framework enabling higher future economic development, while achieving inclusive growth. Such reforms would also help address the high unemployment, especially among the youth.

To this end, the program encompasses the reforms to improve tax administration, reduce the shadow economy and introduce an effective anti-corruption framework. Improvements in property taxation will also enable to have a broad-based and balanced taxation system by including various types of income in the tax framework.

Meanwhile, the program aims to expand the fiscal space for the government to have an ability to finance spending, achieve a high level of capital program execution, which will in turn enhance the growth inclusiveness and the direct impact on poverty reduction in the country. To this end, it is necessary to create an effective governance framework that will lead to a significant improvement in business environment and opportunities for fully utilizing public resources while increasing trust between citizens and the state. Using public-private partnership can also become important for effective capital investment. All this, in turn, will create a strong basis for sustainable and inclusive growth supported by increased investment predictability and attractiveness of Armenia.

Answering your question about the assessment of program implementation, we plan to conduct the first review in September-October, after which we will be ready to share the findings.

- How will the program be reflected in Armenia’s 2020 budget? In your opinion, what should be its main difference from the current year budget? Can we expect a significant increase in capital and social expenditure, which, on the other hand can support the demand in the country amid possible external shocks?

As for the capital expenditure, there is also a target in the budget for this year and it would very good if the target was met. In fact, Armenia under-executed capital expenditure in the past too, and before speaking about the expansion of capital expenditure, it would be necessary to reach the full and effective utilization within the already existing expenditure envelope, so that it produces the socio-economic impact. There are many factors hindering full execution, including the public procurement system which needs improvement. In this regard, there are also possibilities of expanding public-private partnership programs.

- Do you mean that the country has recently had to limit itself in terms of execution of loan projects of such major international institutional donors as the World Bank (WB), the International Finance Corporation (IFC) and others?

Regardless of the source of project funding - whether from purely budget resources or in the framework of loan obligations – at the moment we indisputably have a problem of under-execution of expenditure. Therefore, it is necessary to develop new mechanisms for the effective and correct spending of these funds on time and in full. And as I said, the best way is to ensure that the public procurement procedures are transparent. Expanding the interaction between the state and businesses to solve socially significant problems on mutually beneficial terms within the framework of public-private partnerships can also bring tangible benefits for the development of the economy.

- Let's talk about the problem of financial market development. Its stability is not yet in doubt, but its development is one-sided, and unbalanced. The dominant position of the banking sector limits and significantly reduces the diversification of sources of financing the economy. I mean the country's underdeveloped stock market, a very weak insurance sector, and the lack of domestic institutional investors. The level of market transparency and reporting is insufficient, and corporate governance principles do not work in practice. For many years there have been no serious institutional shifts in the country's financial market. It is believed that transferring of the function of a single financial mega-regulator to the Central Bank 15 years ago was a mistake. As a result we have got a disproportionately developing market, where the banking sector dominates significantly and rises alone in the “open field”.

Armenia is by far not the only country where the banking sector dominates the financial market. But at present, the picture is gradually changing, and the financial sector seems to be developing. This process is driven by the private pension funds; there are also plans to create other institutional investors, as well as other non-banking institutions. I hope that the process of developing the financial infrastructure will become more intensive to allow a diversification of funding sources over time, which will help to establish a capital market, promote greater transparency and strengthen corporate governance. Increased transparency of economic agents and reforms in tax system will also contribute to financial market development. Importantly, the technology business successfully developing in Armenia creates a demand for non-bank resources including private equity and venture funds. In turn, the reform of tax legislation, particularly regarding the property taxation, as well as the real estate cadastre system will also contribute to this process. However, it should be noted that in so-called “emerging markets” or middle-income countries like Armenia, these processes take time and do not happen as quickly as in developed countries.

- There is a concept of “cocoon economy” in economic theory which you are very familiar with as a scholar once engaged in researching integration of developing economies into the world economy. Such a country is characterized by relatively weak ties of integration into the global economy, which, incidentally, has repeatedly saved Armenia from the strong impact of global crises. Can this be considered a temporary benefit of the “safe haven”, which will allow avoiding possible shocks during an economic storm and steadily carrying out the necessary reforms?

I do not quite agree with this assessment. It doesn’t matter whether your economy is large or small, the external impact, whether through trade, remittances or capital inflows, would be quite tangible. Instead of counting on weak economic integration, it is important to be prepared for external challenges and strengthen the foundations of the economy. In this regard, it is important to focus on reforming the institutions, markets, and the governance framework to achieve sustainable, long-term and inclusive growth. We understand and agree with these priorities, and we stand ready to assist the government in addressing these challenging issues.