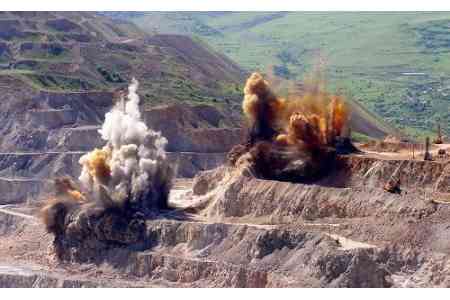 ArmInfo. Corporate bonds of  the largest mining company in Armenia - Zangezur Copper Molybdenum  Combine CJSC (ZCMC) - passed the listing procedure and registered on  the Abond site of the Armenian Stock Exchange (AMX). This was  reported to ArmInfo by the exchange.

The book building started on September 30 and closed on November 20.  No information has been posted on the results of the placement of  debt securities on the plant's website. However, according to the  prospectus for the issue of borrowed securities (bonds) posted on the  ZCMC official website, the issuer issued registered coupon bonds in  non-documentary form with a nominal value of US $ 100 and 100,000  Armenian drams. Total issue of foreign currency bonds amounted to 50  million US dollars (exchange ticker ZPXKB1, abbreviation  AMZPXKB21ER2), and dram - in the amount of 2.5 billion drams  (exchange ticker ZPXKB2, abbreviation AMZPXKB22ER0).

Coupon yield of dollar securities was set at 7.5%, drams (at the  coupon rate) - 11% per annum.  The bonds were issued in one tranche  with a maturity of 3 years.  Coupon payments will be made: dollar -  once a quarter, and dram-once in six months. Underwriter and  market-maker of corporate bonds of ZCMC is Ameriabank, one of the  largest Armenian banks.

To recall, on September 23, the American rating company Moody's  Investors Service ("Moody's") - released its first rating for ZCMC at  B2, with a Stable outlook. It should be noted that the rating  obtained by Zangezur Copper-Molybdenum Combine is two scales lower  than the sovereign rating of Armenia assigned by Moody's on August  27, 2019 (Ba3 - stable outlook).

According to ZCMC documents, from 2008 to 2019, investment in  expansion and modernization of production amounted to about $ 500  million, as a result of which the plant's output increased from 8  million to 20 million tons of ore. The company set a goal in 2020 to  bring its production results to 22 million tons due to capital  investments of the current year.

The company's shareholders are the German company Cronimet Mining  (60%), Yerevan Pure Iron Plant OJSC (15%), Armenian Molybdenum  Production LLC and Zangezur Mining LLC (12.5% each). The capital  structure up to individuals and companies directly affiliated with  the main holders of ZCMC shares is fully "nominal" transparent,  however, the company does not provide information on the ultimate  beneficiaries. In the Armenian press there was information that the  relatives of the third president of Armenia Serzh Sargsyan, who  resigned after the "velvet revolution", have interests in the  company. A number of parliamentarians of Armenia appealed to the  relevant authorities with a demand to begin an investigation of the  fact that the company's multi-million assets are actually owned by  rather modest persons, in particular people, close to Sargsyan's  relatives.

Meanwhile, as Zara Tonakanyan, press relations manager for ZCMC,  previously told ArmInfo, the company management decided not to inform  the public about this event and not to issue a press release, even  despite the open type of issue of its first corporate borrowed  papers. She categorically refused any comments on this subject.

According to market experts, the concealment of information on the  issue of a bonded loan by one of the largest enterprises in Armenia  may be related to the reluctance of management to communicate with  the media, even the business press, in the context of the  environmental safety of mining operations, aggravated in Armenia  after the "velvet revolution", safety and security of tailings and  the need for urgent measures to tighten requirements for  environmental standards. However, the company, in describing the  risks to investors, paid special attention to this issue. To note,  recently an environmental accident occurred at ZCMC - there was a  leak of wastewater connecting the mine with the tailing dump. The  amount of damage to the environment is not reported.