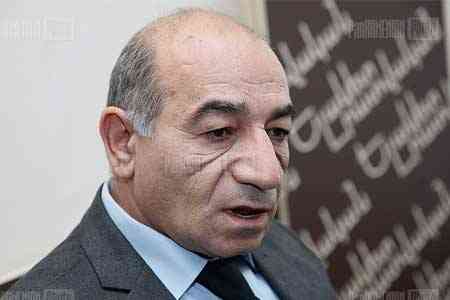 ArmInfo.As it is known, a program is being implemented at the Armenian  Nuclear Power Plant to extend the life of the second power unit, the  most important component of which is to increase the safety level of   the ANPP.  ArmInfo correspondent Alexander Avanesov's interview with  Ashot Martirosyan, Chairman of the RA Nuclear Security Regulatory  Committee, on the process of the project implementation and other   relevant issues.

- How would you rate the work done at the station in terms of  ensuring its safety?

In 2012, the Armenian government decided to extend the life of the  second power unit of the Armenian NPP for 10 years - until 2026. This  project has become the main, cornerstone issue in the Committee's  activities. In particular, the Committee is tasked with licensing the  ESL - (extension of service life) in accordance with the requirements  of norms, rules and programs approved by the Government of the  Republic of Armenia.  Works related to systems that are important  from a security perspective are subject to licensing. In 2011, the  Committee issued a license for a period of 10 years, after which each  year after carrying out preventive maintenance at the station, taking  measures to improve safety, and also reloading with fresh fuel, a  permit is issued for continued operation. On April 1, 2021, a valid  license expires. This license, after carrying out the relevant work  established by the Decree of the Government of the Republic of  Armenia N1085 of 2012 may be extended until 2026.

- You mentioned the scheduled preventive work at the station. Are the  dates for shutting down the NPP already known?

The station plans to stop the operation of the 2nd power unit on May  15.  During the preventive maintenance, it is planned to carry out  standard repair work, reload with fresh nuclear fuel and continue  work related to ESL.

-And how would you rate the work already done  at the station in terms of safety?

- Unfortunately, the work done on the ESL cannot yet fully satisfy  the Committee. And from our point of view, all program participants  are guilty of this. The customer (ANPP CJSC) did not show due  competence and responsibility.  Meanwhile, all the work had to be  planned in advance, concluding relevant agreements, so that the  contractor and subcontractors would be aware of the upcoming work in  a timely manner and place orders for the supply of equipment and  services. But this, unfortunately, is not happening so far, which is  of concern to the Committee. We hope that in the coming period all  these issues will be resolved.

-One of the serious issues on the agenda is the problem of the  disposal of nuclear waste. How will this task be solved in the near  future?

- We have a fairly good example of storing spent nuclear fuel. At the  site of the plant, with the participation of the Framatom company, a  modular type dry storage facility for SNF (SFSF) was constructed at  one time using American technology NUHOMS-24.  Its design life is 50  years. Currently two phases operate, and the issue of the third one  is on agenda. In 2000, the Committee issued a license for its  operation. US experts conducted research on their storage facilities  after 10 years of operation and found that this type of storage can  be operated for 70 years. This repository is also interesting because  it has no active elements. Nevertheless, the problem with SNF will  have to be solved sooner or later.  Perhaps, in the future, roads  will be unblocked, which will allow it to be taken out or other ways  of its disposal will appear.

-Quite recently, EU experts conducted research, based on the results  of which a report was prepared, in which the work done on the  development of the National Action Plan for the ANPP stress test was  evaluated positively. At the same time, proposals were made, which,  however, were vague. Could you clarify the essence of these  proposals?

the implementation of activities under the National Action Plan is  being carried out more slowly than we would like. The European Union  provides technical assistance to the ANPP on a number of issues. In  particular, mobile pumps, generators will be provided to the ANPP,  and work will be carried out to increase the density of the ANPP  hermetic zone. First of all, the proposals are aimed at improving the  seismic safety of the station, on the basis of which the NPP Seismic  Safety Reassessment Program was developed, which was approved by the  IAEA and meets the EU requirements.

-The current law "On the safe use of atomic energy for peaceful  purposes" was adopted back in 1999, are there any plans to develop a  new atomic law?

You're right. More than 20 years have passed since the adoption of  the law. Although, over the specified period, the law was amended and  supplemented, but taking into account modern requirements, new IAEA  standards and EU directives, it became necessary to develop a new  law. We believe that work in this direction will be completed before  the end of 2020, after which in the first half of 2021 it will be  sent for examination by the IAEA and the EU, and after receiving  proposals and comments by the end of 2021 it will be submitted to the  government and then National Assembly of RA for consideration.

- What other facilities are in the Committee's field of vision?

Basically, these are medical institutions, industrial enterprises,  scientific and research centers. Licensed work is being conducted  with the Yerevan Institute of Physics.

- As an expert do you believe in the possibility of  building a new nuclear unit in Armenia?

In fact, we are not the one to answer this question. I can simply  express my personal point of view. We are studying the security  issues of modern blocks, and if the RA government makes a final  decision, we are ready to start licensing. Currently, small modular  units are becomeing more and more popular. For example, recently,  Ukraine entered into an agreement with Canada on the construction of  6 new modular nuclear power plants with an installed capacity of 160  MW each. Moreover, financing for these projects is already open. In  any case, this is not a question to addressed to the committee.

-Thanks for the interview