RAEX-Europe confirmed the sovereign government credit rating of  Armenia at `BB-` with change of outlook from ``Positive`` to  ``Stable``, expecting 1.5% GDP decline in 2020 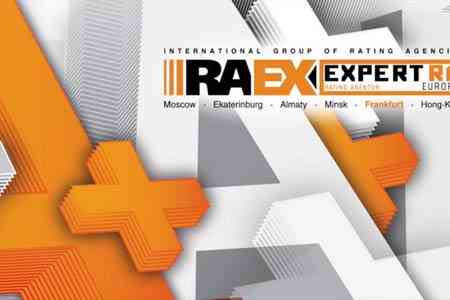 ''The change of the rating outlook for Armenia from positive to  stable reflects our expectations about a widening of the budget  deficit and an increase in debt levels by end-2020, together with the  anticipated contraction of the economy. However, the sovereign  government credit ratings were confirmed at 'BB-', due to the fact  that most of the debt increase is related to donor support at  concessional terms. The ratings also remain supported by adequate  quality of the fiscal and monetary policies, low inflation and a  stable stance of the banking system.

Nevertheless, government debt levels and its currency structure,  together with a high exposure to external shocks, high dependence on  imports and negative current account balance, continue to be the  factors constraining the rating'', Vladimir Gorchakov Associate  Director at RAEX-Europe clarified.

After remarkable growth in 2019, a recession is expected. After a  strong growth at 7,6% y-o-y reported in 2019, which was the highest  over the last decade, the Armenian economy was hit by the COVID-19  crisis. In response to the growing number of infections, authorities  declared a national state of emergency, with restrictions for  travelling, restaurants and other services. Taking into account the  high importance of the tourism and retail trade sectors for the  economy, the state of emergency translated into a GDP growth slowdown  to 3,8% y-o-y in 1Q 2020, while sectors, such as manufacturing,  construction, transportation, tourism and entertainment had already  contracted in real terms. Moreover, the monthly indicator of economic  activity in May 2020 showed a contraction of 12,8% as compared to May  2019.

Due to the already confirmed prolongation of the state of emergency  in July 2020, the expected recession in major trade partners and drop  of remittances, RAEX-Europe expects an overall contraction of the  economy at around 1,5% by end-2020. However, in case of a second wave  of the pandemic were to surge and turbulence in the global economy  were to be prolonged; we could adjust this figure to the downside.  Nevertheless, real GDP output is expected to turn positive by  end-2021 and to be in the range of 4,5-5%

Sharp increase of debt load by end-2020. According to the 2019 final  data, the level of public and publically guaranteed debt reached  53,6% of GDP, and the central government debt dropped below 50%,  which is in line with the government's original objective. However,  the government already requested for additional financing mainly from  the IMF and other international institutions, as well as local  markets, in order to finance increased spending. The IMF already  approved around USD 280 m program for Armenia in April 2020, and  additional support expected from other donors. In addition, as of May  2020, 77% of public debt was FX-denominated, which makes it heavily  exposed to currency shocks.

Due to these factors, RAEX-Europe expects a sharp debt increase up to  64% of GDP and 275% of budget revenues by the end of 2020, which  restricts our rating assessment for the next year.  However, the  negative influence of debt dynamics is partially mitigated by the  fact that a major part of new liabilities are related to financial  support from international donors, such as IMF and ADB. In addition,  the current favorable public debt structure supports our rating  assessment: as of May 2020, short-term debt accounted only for 4,8%  of total debt and 16% had floating interest rate.

The fiscal deficit is expected to widen considerably. Continued  fiscal reforms with the strengthening tax discipline, growth of  revenues on the back of strong GDP dynamics together with the capital  expenditures below plans, led to a narrow deficit of 1% of GDP in  2019 (see graph 3). In the face of the COVID-19 crisis, the  government of Armenia by May 2020 announced a financial support  package with a headline amount of USD 300 m (2% of GDP), which  includes direct social assistance transfers to some categories of  citizens; labor subsidies for SMEs; subsidized loans to some heavily  affected enterprises. Moreover, the authorities keep announcing  additional support measures according to the development of the  current recession.

This fiscal stimulus together with the steady contraction of tax and  export revenues, will lead to a sharp increase of the deficit, which  expected to reach 5% of GDP by end 2020, compared to 2,3% originally  planned for 2020 Budget. However, we expect the deficit to go below  the 3% threshold as soon as in 2021.

RAEX-Europe considers the quality of the fiscal policy as adequate on  the face of the current economic crisis, with countercyclical  measures and commitment to increase of transparency, accountability  and predictability of the policy. This includes, transparent public  procurement, reporting of program implementation, as well as  strengthening of the fiscal risks management. The government also  continues public investments management reforms, implementation of  Medium- Term Expenditure Framework and program-based budgeting.  Moreover, in the long-run the authorities commit to fiscal  consolidation and lower debt after the recovery stage.

Low inflation allowed the CBA to accelerate expansionary monetary  policy. As compared to the majority of Caucuses and Central Asia  (CCA) peers, Armenia has lower inflation, that reached 0,7% by  end-2019. Moreover, by the end of 1Q 2020, the inflation rate turned  negative, while the CBA's target over the last two years remains  unchanged at 4%. Balancing pressures from capital outflows with the  space provided by such a low inflation, the CBA accelerated the  policy easing and lowered its interest rate three times during 1H  2020, the last time being in June 2020 when it trimmed it down to  4,5%.  ''We expect that the policy relaxation together with AMD  depreciation will elevate the inflation up to 1,5% by the end of  2020, which we still assess favorably'', the report reads.

In addition to the rate cut, the CBA has conducted repos and FX swap  operations to ensure ample liquidity conditions across the interbank  market. While making limited interventions in March 2020 in order to  smooth AMD volatility, the CBA also confirmed its commitments to a  free float exchange regime. Therefore, we assess the quality of the  monetary policy as a positive factor. However, its efficiency remains  limited by lingering and concentrated local capital markets as well  as still elevated financial dollarization. The later so far keeps  declining despite the volatility on the financial markets.

The banking sector remains stable. Before the COVID-19 crisis credit  to the economy grew at an accelerated pace. Domestic credit provided  by the financial sector and assets to GDP ratios in 2019 reached 65%  and 89% respectively, as compared to 62% and 83% in 2018. However,  this was mostly led by household credits, which grew by 32% y-o-y.  Financial soundness indicators also showed a positive dynamic: the  regulatory capital to risk-weighted assets was 17,0%, NPLs to total  loans stood at 5,3%, ROA and ROE were 1,8% and 12,6% respectively,  while the ratio of liquid assets to demand deposits was 118,1% by the  end of 1Q 2020 .

''However, in our view, the 1Q metrics are not fully reflecting the  consequences of the economy contraction for the banks' balance  sheets, and we expect gradual deterioration of the banking system  metrics by end-2020 with the worsening of asset quality, declining  profitability and capitalization metrics. We also expect credit  growth to slow down in 2020, but being backed by co- and re-  financing government support packages. Moreover, some medium and  small-sized financial institutions could face liquidity and capital  shortage in the mid run.

However, in our view, the already implemented and announced measures  of the CBA, including relaxation of some prudential and reserve  requirements and provision of additional liquidity, will help to  cushion de blow of the pandemic on the banking system'', the experts  of the agency consider.

External position expected to deteriorate. By end-2019 the external  position of Armenia slightly improved with a narrower current account  deficit at 8,2% of GDP as compared to 9,4% in 2018 (see graph 7), due  to stronger transfers from abroad despite the widening trade deficit.  However, since the pandemic has already hit tourism receipts,  remittances and FDI, and it is expected to cause a reversal of  private capital inflows, we expect the current account deficit to  widen slightly up to 8,6% of GDP. However, the financial account is  expected to drop sharply, on the back of the reversal of private  flows in the form of non-resident deposits.

During 2019 the international reserves of the CBA showed a steady  recovery and reached USD 2,8 bn by December 2019, which was equal to  5,7 months of imports, as compared to 3,7 in 2018. Since the AMD  depreciated by 5% against the USD in March 2020, the authorities  intervened by about USD 127 m between mid-March and early April. As a  result, by May 2020 international reserves of the CBA declined by 5%  as compared to the end of year . However, taking into account free  float regime of dram, we consider such levels as adequate, since they  are equal to around 6 months of imports and cover short-term debt by  9x.

In conclusion, as noted in the RAEX-Europe report, the conflict with  Azerbaijan over Nagorno-Karabakh remains unresolved, and its  escalation remains a hidden risk. Moreover, the growth of trade and  political tension in the region has a negative impact on the main  trade partners of Armenia.

Read the full report on the sovereign rating of Armenia RAEX-Europe  at:   https://raexpert.eu/reports/Research_report_Armenia_10.07.2020.pdf  (English version).

Agency Information: Rating-Agentur Expert RA GmbH (RAEX-Europe) is an  independent European rating agency affiliated with the international  group of rating agencies RAEX. Since 2015, the agency is accredited  by the European Securities and Markets Regulator (ESMA) and has the  official status of the Institute for External Credit Assessment  (ECAI). The Agency's office is located in Frankfurt (Germany).  The  purpose of the Agency is to assign ratings in accordance with the  strictest regulation and code of ethics to non-financial companies,  financial institutions, insurance companies, regions and countries.  AmRating National Rating Agency is a partner of RAEX-Europe in the  Republic of Armenia.