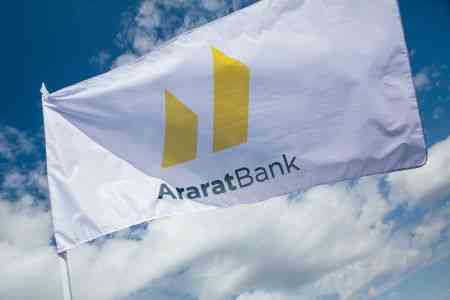 ArmInfo. ARARATBANK announced rebranding, marking the beginning of a new historical stage, for the bank itself, in particular, and the entire banking  system of Armenia in general. Symbolically, the event was organized  at the height of 2851 meters above sea level, on the top of Mount  Teghenis, which offers an incredible view of the biblical Mount  Ararat, Lake Sevan, Mount Arai Ler, Geghama Range and 4 peaks of  Mount Aragats.

"Rising together" is the new slogan of the bank, which according to  the CEO and Chairman of the Executive Board of Araratbank Mher  Ananyan, is not just a set of words, but a new philosophy of the  bank, a style and way of thinking. He stated this on September 24  within the framework of a press tour to Mount Teghenis with the  participation of bank employees, representatives of the financial  system of Armenia and the media, who overcame the height of 3  thousand meters on all-terrain vehicles, which was a very symbolic  event in tune with the slogan chosen by the bank.

Mher Ananyan installed the flag of ARARATBANK's new concept on the  top of Teghenis Mountain, the visual changes of the logo of which  carry new energy, concept and approaches with which the bank intends  to reach "new heights".

''Height is the main symbol of the new concept of ARARATABANK. And  the slogan "Rising Together" serves as the basis for reliable and  strong relationships based on mutual trust between the employee-bank,  partner -bank, state -bank, client -bank. From being an aggressive  "seller", we intend to become a "friend- advisor" to our clients. All  our actions should be based on the idea of unity, "he said. 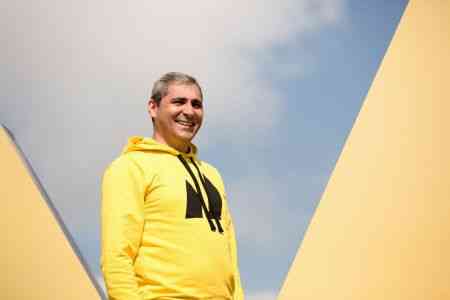 Answering ArmInfo correspondent's question, the head of the Bank's  Executive Board noted that despite the rebranding and introduction of  a new ideology, there can be no "new fantasies" in terms of areas of  activity, tariffs and services, since professionals work in all banks  in Armenia, and in conditions of tough competition new products are  being developed, strategies change, etc. "The question is - with whom  will we go forward. From a financial point of view, the bank's  strategy changes annually, but the new brand forces us to implement  strategy programs with the public, which has new values, realizing  that their success depends on themselves. We want to take a step and  say that we are open to every member of the public who is confident  in himself and does not deviate from values, " M. Ananyan said. In  turn, the Chairman of the Board of Directors of ARARATBANK Grigor  Hovhannisyan emphasized that, in addition to the introduction of new  financial technologies, rebranding will offer a concept focusing on  people, that is, the use of an individual approach. Answering the  question of ArmInfo's correspondent the Chairman of the Board noted  that thanks to such an approach, the Bank can objectively double its  client base, which today exceeds 200 thousand people.

"This means that our bank will become an institution that will  actively introduce the latest technologies and keep up with global  trends, introducing financial solutions based on environmental  responsibility. In this context, a traditional bank is becoming a  "green" bank, focusing on people and the planet, "he said. Being a  "green" bank, according to the Chairman of the Board, is of  fundamental importance. Answering the question of an ArmInfo  correspondent, G. Hovhannisyan explained that this concept provides  for the development of credit products related to solar energy, which  will be focused not only on corporate clients, but also on individual  customers. G. Hovhannisyan did not go into details noting only that  the Bank intends, among other projects, to popularize the use of  electric vehicles by the public.

He noted that in the future he sees ARARATBANK to a greater extent  involved in programs related to environmental protection, assisting  young families, entrepreneurs, technology start-ups, allowing to make  society more inclusive, etc.  In addition, G. Hovhannisyan stressed  that based on the fact that Armenians are a global nation, the Bank  should have a global agenda. ''We would like to be useful to the  Diaspora, or repatriates. 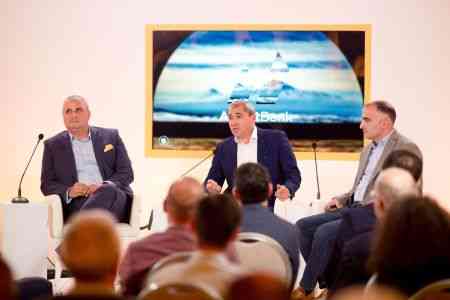 Therefore, over time, we will strive to  become an organization promoting pan-Armenian programs, a partner and  structure for the implementation of the ideas of all Armenians. Today  we extend our hand to all those who believe and trust us to walk this  path together, "he said. The Chairman of the Board also noted that  ARARATBANK received a good legacy from the previous management in the  person of 20 international partners, with whom strong relations have  been formed. In this regard, he noted that the Bank plans to expand  the geography of partners to cover the countries of the transatlantic  continent and the Persian Gulf.

Within the framework of the press tour, discussions were also held in  the Fishbowl format, during which the member of the Board of  ARARATBANK, co-founder of Braind Company Karen Babajanyan presented  the visual changes and the concept of the bank's rebranding. Speaking  about the new logo, which depicts two ascending columns, symbolizing  Mount Ararat, he noted that the selected colors - black and yellow -  symbolize balance and discipline along with lightness, dynamics and  continuous rise. K. Babajanyan urged:  "Everyone must conquer his  Ararat. Let's rise together''.

To remind, "ARARATBANK" OJSC has been operating in the Armenian  market since November 2005. As of July 1, 2020, the majority  shareholders of ARARATBANK are one of the largest oil traders in  Armenia - "Flash" company with a 72.73% stake in the capital.  ARARATBANK is included in TOP-5 in terms of the coverage of the  branch network, having 58 offices.