The later the economy will be restored, the higher the probability of  a foreign exchange rate and yield of bonds 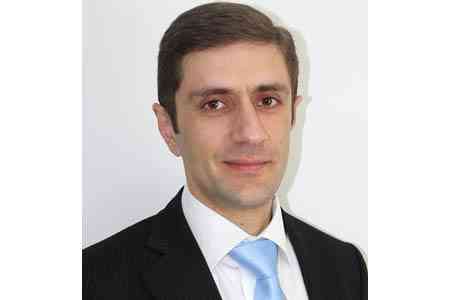 ArmInfo. In the near future, harsh fluctuations are not expected, but if the recovery of the economy will require a longer time, then a small increase in the exchange  rate and profitability of securities is possible. Such a forecast in  an interview with Arminfo gave the General Director of the company  "Capital Asset Management" Alik Arakelian, noting that, nevertheless,  this growth will be manageable.

Regarding the opinion that the 2021 will be the year of risk assets  and there will be a tendency to diversify a portfolio on medium-term  instruments, he explained: "In total, investing always contains  risks, based on what I can not say that the 2021th will be the year  of risk assets. But I agree that in the 2021th risk level somewhat  increased. At the same time, a high level of risk implies a higher  yield, and therefore each investor himself must evaluate the risk and  profitability for it. " In this context, A. Arakelyan said that the  company "Capital Asset Management" at the moment prefers assets of  funds managed by it in short and medium-term bonds, which will  provide a yield of 1-1.5% lower than the market level. "The choice of  such a strategy is due to the exclusively structure of our  customers," he explained.  Speaking about yield, he noted that in  Armenia there is a high level of long-term government bonds (LtGB),  followed by the downlink corporate drum bonds, medium-term and  short-term government bonds (MtGB and StGB),    and closed this list  of profitability corporate dollar bonds.

As an example, he led to the dynamics of profitability of investment  funds managed by the company "Capital Asset Management", notifying  that the assets of managed pension funds are relatively small. This  dynamics demonstrates a decrease in the yield of AMD assets in 2020  compared with 2019 from 17.7-27.5% to 5.3-5.4% (according to Armenian  government bonds and corporate  AMD bonds) and increasing the  profitability of dollar assets with 3 , 6% to 12.7% (in Armenian  corporate dollar bonds). The company who has not been changed to this  day to invest in the assets of all funds managed by it in securities,  A. Arakelyan explained to ensuring a higher profitability than the  deposits. "Moreover, over the past few years, banks have intensified  in the securities market, offering bonds with a higher yield, which  you will not say about deposit rates. If adding to this, the higher  liquidity of securities, then the advantage of investing in them  becomes obvious," - he concluded.

"In the short-term context, in particular, considering the increase  in the dollar exchange rate observed in the past few months, currency  assets provide a higher yield (in dram expression). But in the  long-term cut, even taking into account the volatility of the  exchange rate, dram securities historically always ensured a higher  yield. "," says A. Arakelyan.  It should be noted that CJSC "Capital  Asset Management" is the first in Armenian  investment management   and pension funds in Armenia, the State Registration was held and a  license of the RA Central Bank was received on October 18, 2012.   According to the specialization of its activities, the company  invests assets in the funds managed by it, which are 5, from which 2  are  voluntary pension funds and 3 - investment funds (2 - on drama  assets, 1 - on dollars).

Specifically, investment funds are as follows: CAM GBF (Investment  Fund of Public Bonds) - Public Fund, whose assets are fully invested  in Armenian state bonds; Kam Bridge Foundation I is not a public  foundation, with additional risk, the assets of which are invested in  Armenian government bonds and corporate drama securities; Kam Bridge  Fund II is not a public foundation, dollar, whose assets are invested  in Armenian corporate dollar bonds. Abbreviation Kam imply "two in  one" - the brief name of the company and the meaning of the word  “voluntary, volunteer”  in Armenian (“Kamavor”).