Expert: Talk about the construction of a new nuclear power plant in  Armenia does not go beyond political rhetoric 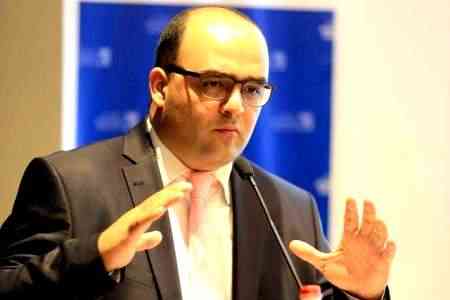 ArmInfo.At this stage, conversations and discussions around the construction of a new  nuclear power plant in Armenia do not go beyond the framework of  table toasts, Vahe Davtyan, an expert in the field of energy  security, Doctor of Political Sciences expressed a similar opinion to  ArmInfo, commenting on the possibility of building a new nuclear  power plant in Armenia, voiced by Prime Minister Pashinyan at a  meeting with Russian President Putin.

"And this is despite the fact that the construction of a new nuclear power plant is recorded both in the Government Program and in the Energy Sector Development  Program for 2020-2040. Against this background, I state with full  responsibility that there is no clear scenario for the development of  nuclear energy in Armenia. In other words, we do not even know the  NPP of what capacity we want. We do not know in which direction the  energy system of Armenia should develop, we do not even have  medium-term and long-term forecasts of the energy balance, "he said.

Based on the foregoing, the expert is convinced that any mention of  the need to build a new nuclear power plant in Armenia, at least,  should be accompanied by a clarification, in fact, of the scenario  according to which the authorities want to develop nuclear energy in  the country. In this light, Davtyan characterizes Pashinyan's  proposal to Putin to build a new nuclear power plant as not going  beyond political rhetoric. In his opinion, this is how the Armenian  prime minister undertook a primitive attempt at political  maneuvering. Moreover, the latter was correctly diagnosed and  evaluated by its addressees.

According to Davtyan, the essence of Pashinyan's attempt to make a  political maneuver was motivated by the desire to demonstrate to  Moscow the absence of political messages in Yerevan's decision,  adopted in June 2020, to refuse the remainder of the Russian loan to  prolong the operation of the ANPP. Meanwhile, in his opinion, by this  decision Armenia lowered the energy dialogue with Russia from the  level of ensuring strategic security to the level of technical  cooperation with the Rosatom corporation.  "Meanwhile, in reality,  Armenia's refusal from the Russian loan contained serious political  messages.  Especially taking into account the previous consultations  of the Armenian authorities with the US State Department, within the  framework of which the construction of a modular nuclear power plant  in Armenia was discussed. At the same time, such a prospect does not  fit into the general regional logic of the development of the  peaceful atom and nuclear energy. First of all, due to the fact that  it can deprive Armenia of the strategic status of a state developing  the peaceful atom, "the expert concluded.

To recall, the Armenian NPP (Metsamor NPP) consists of two units with  Soviet (Russian) VVER reactors.  The first block was put into  operation in 1976, the second - in 1980. In March 1989, after the  devastating Spitak earthquake, the work of the station was stopped.  In November 1995, in connection with an acute energy crisis, the  second power unit of the station with a capacity of 407.5 MW was put  into operation.

In March 2014, the Armenian government decided to extend the life of  the second power unit. To this end, Armenia attracted a loan of $ 270  million and a grant of $ 30 million from the Russian Federation. As  of early 2020, the residual resource of these funds was $ 107  million. For objective and subjective reasons, it was not possible to  agree with Russian partners on this residual resource. For this  reason, it was decided to attract a budgetary loan of 63 billion  drams.

Today the ANPP provides more than a third of all electricity in the  country and ensures its energy security and independence. The  strategic program for the development of the energy sector of Armenia  until 2040 provides for a repeated extension of the life of the  Armenian nuclear power plant after 2026, and in the future, the  construction of a new nuclear power plant.