A year of fragile hopes or double-digit growth: What actually awaits  the Armenian economy in 2021 - Ashot Osipyan 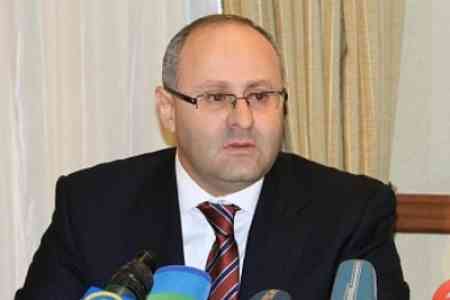 ArmInfo. The decline in the Armenian economy in 2020 was about 7.5%, largely due to the coronavirus pandemic and the Karabakh war. According to the forecasts of the IMF  and the Central Bank of Armenia for 2021, growth will be about  1-1.4%.

According to IMF experts, the recovery of the Armenian  economy will be delayed. Meanwhile, the Minister of Economy, despite  the 3.2% growth rate set in the budget, forecasts even double-digit  growth for the Armenian economy by the end of the current year.  Member of the Board of Directors of the Asia-Pacific Bank, economist  Ashot Osipyan told ArmInfo correspondent how justified these  expectations are and what real growth the Armenian economy can  "claim".

- Mr. Osipyan, in Q1 of 2021 compared to the same period in 2020,  Armenia's economic activity decreased by 2% (against 4% growth in the  Q1 of 2020). At the same time, the Ministry of Economy of Armenia  announces the restoration of the dynamics of growth and its head  insists that by the end of the year they will ensure the coveted  double-digit growth. Will there be any growth or is it just talk, as  they say, in favor of the poor, which can be forgotten immediately  after the elections?

- Let's look at the key drivers of GDP growth separately (government  spending, investment, consumption and net exports). At this stage,  the insufficient level of government spending, one of the drivers of  GDP growth, does not allow for high growth. Perhaps this is  objectively caused by the insufficient level of tax revenues to the  state treasury. In the meantime, public capital investment around the  world is an effective fiscal tool to stimulate economic growth. For  example, in the United States, government spending has reached 20% of  GDP.

The same world practice suggests that with an inadequate level of tax  revenues of the state budget, countries are following the path of  increasing the national debt (over 3 years, the national debt of  Armenia has grown by about $ 2 billion - ed. note). In addition, due  to the fact that at present the interest rate on borrowings is at a  low level, many countries are going to attract borrowed funds to  implement their own programs. After all, an increase in the national  debt is not dangerous in itself - it is dangerous to use it  ineffectively. The economy has certain so-called KPIs (Key  Performance Indicators) to measure the effectiveness of external  borrowings. For example, one of these indicators is the ratio of GDP  growth to the interest rate of attracted public debt (GDP growth  outstripping the interest rate is evidence of its effectiveness).  Ordinary citizens can also make such judgments - namely, whether  their life has changed for the better or for the worse over a certain  period of time (inclusive growth).

The second important factor in ensuring economic growth is  investment, both internal and external - in our case, the increase in  investment in fixed assets had a negative value. This is due to the  fact that, unfortunately, we have not created the conditions for  attracting and assimilating investments. At this stage, moreover, one  should not expect an increase in the volume of foreign investments,  both in connection with the political situation in Armenia, and  taking into account the global trends in the behavior of investors  who are under the influence of the so-called "animal instinct", when  the slightest danger makes investors return their investments home.

Household spending could also be a stimulus for the growth of  Armenian GDP. However, even with the naked eye, one can see a  decrease in the level of consumption (according to the Statistics  Committee, trade in the first quarter fell by 5.6%). Thus, this  growth-promoting element should also be excluded.  As for net  exports, it is simply unrealistic to expect a large increase in this  indicator, given the current structure of the economy.

Mr. Osipyan, experts say that there are external factors that can  have a positive effect on the GDP indicator and "pull it up" -  consistent maintenance of the current high level of prices in the  world copper market:

Copper prices will rise until 2025, and, according to a number of  experts, this growth may reach 30%, which is associated with an  increase in the production of electric vehicles. But it is wrong to  build an economic policy based only on expectations in the copper and  metals market.  Perhaps the impact of this factor will take place,  but in the short term. Perhaps even the authorities will ensure some  growth - but definitely not double-digit growth. Personally, I oppose  the idea that our economy should depend on copper or turn into a "raw  material appendage". As history shows, this is a bad practice.

To avoid such a scenario, the Armenian government should think about  ensuring inclusive growth - developing all sectors of the economy,  achieving sustainable growth. Such growth can transform the economy  and increase productivity. Indeed, it is the increase in productivity  and demographic growth that are the drivers of economic growth, and  since in terms of demographics, our indicators, say, are not very  encouraging, we need to work at least in the first direction.

In this case, if we analyze our capabilities and recorded  indicators, what result will we come to by the end of 2021?

I think the forecast of the IMF and the Central Bank is the most  realistic.

Thank you for the interesting interview.