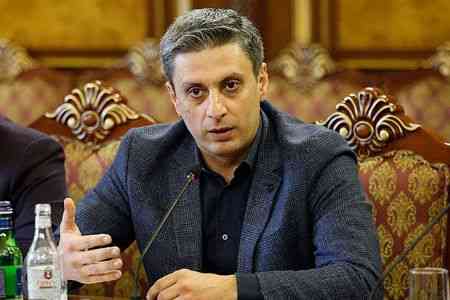 ArmInfo. Representatives of the catering sector are beating the alarm - the Armenian government, within the framework of measures to cover the "tax gap", and in  violation of previously reached agreements, initiates tax changes.

As a result of the proposed reforms, the tax burden for the restaurant  business will increase significantly, which, according to  representatives of the field, will become a stranglehold on the neck  of the business. Ashot Barseghyan, Chairman of the Armenian  Restaurants Association, an expert in the field of public catering,  told ArmInfo how the restaurant business survived the pandemic and  the war in Artsakh, and what consequences the government's initiative  will turn into.

- Mr. Barseghyan, how do you assess the pace of restoration of the  restaurant business in Armenia? Can we say that business has returned  to the pre-pandemic level?

- The restaurant business in Armenia is recovering very sluggishly.  The government has not taken measures that would help increase the  flow of tourists to Armenia. In particular, the question is as  follows: Armenia is a small country and, if desired, it could very  quickly and very effectively organize full vaccination of the  population - becoming the first country with a fully vaccinated  population. Then this fact could be very competently used for  marketing purposes, attracting hundreds of thousands of tourists to  the republic, including Russian ones. In addition, the travel  industry today operates without a "state leader" - there is a  department in the Ministry of Economy of Armenia that oversees  tourism, but it functions without a head. That is, no one is in  charge of this very important area for the country's economy, which  naturally impacts the effectiveness of this department. As a result,  we do not see any functional changes and practical steps aimed at  government assistance, which extremely hinders the recovery of  business. The restaurant business is still working at 50-60% of the  pre-pandemic level - the tourist flow has not recovered, and the  event industry has not recovered either, since people do not hold  mass events or organize them in a small scale.

-- And yet, how would you assess the level and effectiveness of  business support from the point of view of last year's government  anti-crisis measures? Were you able to maintain jobs, and if not, how  many percent do you estimate they declined during 2020, given the  collapse of the tourism industry?

- I assess the level of support for business from the government as  rather low, the measures it carried out were mostly declarative and  populist. Thus, out of two dozen support programs adopted by the  government, only two measures were useful for the industry, and then  only with a stretch. The first is a program for providing  interest-free loans during the pandemic, within which, in fact,  businesses simply replaced their commercial loans with soft loans  from the state. In fact, this tool did not help the business, which  was in need, and just replaced financial obligations for those who  were healthy. The second program concerned the subsidizing of social  benefits to industry workers for 6 months. In the meantime, the  entire social burden was taken over by the business - for a couple of  months the sector was on "forced leave", workers were not fired en  masse, but their wages, albeit in a truncated form, were paid, which  speaks more of the social responsibility of the business itself and  fears of losing staff.

According to my subjective estimates, about 200 large and  medium-sized catering enterprises have closed in the country, out of  50 thousand people employed in the field, about 5 thousand jobs have  been closed.  Then, when they began to recruit, it turned out that  there was a shortage of workers, since an outflow of labor was  recorded. At this stage, the pace of recovery is still very low, but  we hope for a more intensive recovery, in case of a competent and  tourism-oriented government policy.

- In your opinion, what is the rough estimate of the share of foreign  tourists in the total revenue of the restaurant business? Can we  assume that there is no need to talk about a full recovery of income  until the tourist flow to the country is restored?

- The total flow of foreign tourists in 2019 was about 30-40% of our turnover, which is  very significant for our industry. The government should try to fully  restore the tourist flow. I want to again stress the vaccination  problem that I talked about at the beginning.

- How do you assess the government's initiative to transfer the  catering sector to general taxation system? Are we now faced with a  dangerous policy from the government: the prevalence of fiscal goals  over the goals of development and economic recovery?

- The initiative of the Ministry of Economy to transfer the catering  industry to a general taxation system will be disastrous for the  industry - this will significantly, I think, even three times,  increase the tax burden on the restaurant business, which will  greatly affect the operation of the industry. A significant part of  those employed in the field will lose their earnings. Back in 2018,  when the financial authorities of Armenia started talking about a 10%  turnover tax for restaurateurs, we managed to convince them, arguing  that this would lead to a significant increase in our expenses.  Restaurateurs have proposed setting a threshold for turnover tax at a  rate of no more than 3%. As a result, a compromise decision was made  - the license tax for restaurants (tax per square meter) was replaced  by a 6% sales tax, with the possibility of a tax deduction of 3% of  the documented expenses, but not less than 4% of the turnover. From  January 1, 2019, the tax burden was supposed to increase to 8%, and  from 2020 to 10% of turnover. But during the discussions in the  government, an agreement was reached - the authorities will not  interfere for several years and so far the sector has been working  with a 6% turnover tax. Today they are talking about the complete  elimination of the turnover tax and the transition to value added  tax. I understand that the industry should move towards VAT, but not  today and not in a year or two, but in 10 years, given our pace of  recovery. This measure will simply kill business, and the government,  in turn, will not achieve the stated goal of reducing tax arrears,  since by making such drastic changes for the sake of immediate  benefit, it risks losing much more in the medium and long term.