Andrey Sinyakov: We consider the completion of the second stage of the modernization project of the Agarak Copper-Molybdenum Combine as a serious anti-crisis measure 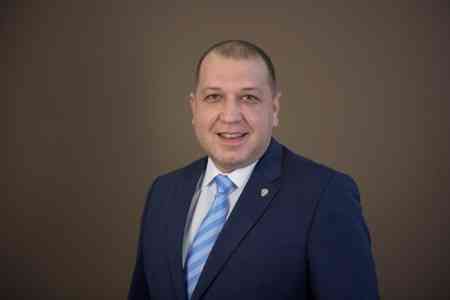 ArmInfo.  Despite serious attempts to diversify Armenia's export-oriented industries, the mining industry remains the main locomotive of the country's economy. One of its largest players is the Agarak Copper-Molybdenum Combine (ACMC), which is included in the list of the largest taxpayers and is the operator of the city-forming enterprise, bordering Iran, in the southernmost region of Armenia.

ACMC CJSC, a member of the Russian Geopromining Group of Companies (GPM), became its second asset in Armenia in 2007. At first the group acquired GPM Gold, which operates the Sotk gold deposit and the Ararat gold recovery plant. The group's entry into the Armenian market coincided with the international financial and economic crisis, followed by the systemic crisis of 2014, and then the current global pandemic crisis. In fact, the state of permanent, successive crises motivates the group to constantly work to increase the profitability of production in order to remain competitive.

Recently Agarak Copper-Molybdenum Combine announced the completion of another project to modernize production, which was aimed at capital renovation of production: technological re-equipment of the enterprise, re-equipment of a quarry, factory and the implementation of a number of environmental subprojects. ArmInfo correspondent talked with the general director of ACMC CJSC Andrey Sinyakov about the results of the program and plans for the future, as well as about the state of the industry itself.

- Andrey Anatolyevich, you have been heading ACMC for about 5 years, having arrived in Armenia from cold Yakutia. Can we conclude that you have become a “stress-tolerant” manager, literally and figuratively?

- You know, I often think about it and it seems to me that in a figurative sense it is so. Our company entered Armenia with the crisis and, one might say, we are not getting out of this state. It was very difficult last year due to the pandemic and of course the 44-day war. The latter circumstance was very difficult to bear. Almost half of a thousand of our workers went to the front. But today, we seem to have overcome this shock and continue to work. Moreover, we managed to complete our next five-year production modernization program and reach a stable schedule.

- What numbers are we talking about and what did you manage to do?

- The investment program of the second stage amounted to about USD 30 million. In fact, the implementation of the program allowed us to significantly reduce our variable costs due to the introduction of new equipment and complex organizational and technical measures. As part of the investment project, we re-equipped the quarry, carried out work on the technical re-equipment of the main mining and transport equipment. The main priority was the introduction of Chinese equipment from LGMG (technological transport), SDLG (loaders), XCMG (graders) and SHANTUI (bulldozers). The fleet of excavating and loading machines was renewed, four KOMATSU excavators and three drilling rigs were purchased.

Last year, a project was also developed to increase the productivity of the enterprise from 3.5 million tons to 4.5 million tons of ore per year. Within its framework, the plant's concentrating plant was modernized: a large-scale reconstruction of the crushing department took place, the old equipment was replaced with high-performance crushers by METSO. A new grinding building was built, two new mills manufactured by TYAZHMASH were installed.

I would like to note that since 2008, taking into account the two stages of implementation of investment projects, the shareholders have allocated more than 90 million US dollars for the development of Agarak CMC. We are now preparing for the third stage of modernization.

- As far as I understand, the third stage will concern the reduction of variable costs?

- Quite right. Our goal is to improve the recovery of copper. According to rough estimates, this third stage of the investment program will cost the company 35-40 million dollars. This is a large amount for our enterprise, it involves the replacement of the main technological equipment. But on the way out we will approach the level of extraction up to 85% of copper. And this is already a serious claim for a significant increase in the profitability of the enterprise.

- We can say that, having solved the whole complex of tasks, which will cost you 120-130 million US dollars, will enable ACMC to start working in a more “lightweight” mode, in terms of less dependence on world prices. That is, to give the work more elasticity and stability?

- You know, copper production is almost unpredictable. If, say, other metals are somewhat conservative in terms of predicting world trends, then copper is characterized by the opposite properties, it reacts very quickly to any crisis manifestations. And since the world economy is in constant dynamics along a sinusoidal curve, copper plants must constantly improve to form a so-called "safety cushion". Today, after the pandemic collapse, copper prices skyrocketed due to unprecedented growth in demand, primarily in China. The cost of the concentrate has risen to 9600 -  10,000 dollars today, but how much it will cost tomorrow is difficult to predict. Moreover, many analysts predict a new global financial and economic crisis. However, as long as the situation is favorable to us, we intend to start a new investment program next year and develop further.

Now we are carrying out the necessary audit and research in the field of enrichment and, in general, we plan to launch this program in stages within the next year. It can take 3-4 years.

- How can the recent government decision to “remove the cream” from mining enterprises in Armenia through a temporary “opportunistic” increase in export duties affect all your plans? On this occasion, there are various expert assessments - from positive to the most negative. Are you going to pay and will it interfere with the implementation of the next investment program?

- Of course it will interfere, instead of implementing plans for 3-4 years, we will have to stretch it to 10. The law does not have retroactive effect at all. Our licensing and concentrate supply agreements end in February 2022. Then it will already be seen how everything will line up. In any case, there are several ways to work around this solution quite legally. And we are considering them today.

In general, we, as industrial investors, are not supporters of changing horses at the crossing. Moreover, the companies have obligations, both investment, and contractual with counterparties, and social, and other kinds. Therefore, such abrupt movements on the part of the Ministry of Economy of Armenia, to put it mildly, do not please us.

- Did they consult with you? The government believes that the cost of a ton of concentrate of  5,000 - 5,300 US dollars is quite comfortable for work and for investment in production.

- You are asking an obviously rhetorical question. As part of the membership in the Union of Miners and Metallurgists, the enterprises gave their assessment of this decision and sent it to the Prime Minister, the State Revenue Committee and other departments, but there was no reaction. After all, as far as the cost price is concerned, it is different for different manufacturers, depending on the scale, technology, and volumes. The cost of finished products may vary from the volume of production costs. Periodic inflation also affects the cost of production. To talk about  5300 US dollars in the industry is a highly exaggerated figure, since we cannot be compared with the same Zangezur Combine (ZCMC), where production volumes are 5-6 times higher than ours and more modern enrichment technology - up to 85-86%.

In addition, it should be borne in mind that when prices on world markets were kept at a low level, we invested in modernization, assumed significant credit obligations, hoping that the price situation would change and we would be able to start paying for them. So, not everything is as simple as the government thinks. It is known that when entering another country with investments, one must understand the local rules of the game. In Armenia, unfortunately, the rules of the game change in the course of life. It should not be.

- Do you also have social obligations?

We have approved open pit reserves for almost another 40 years. And this means that Agarak and Meghri, many of whose residents work in our company, do not have to worry, especially since we take great responsibility not only for our social obligations, enshrined in the license agreement, but within the framework of social responsibility programs we try to help local authorities.

For 12 years of work, we have paid more than 135 million dollars taxes to the budget, including VAT. But in the last three years alone, in addition to social obligations, we have invested more than half a million dollars in the infrastructure of the Meghri region. This is support for infrastructure projects; utilities, asphalting, night lighting of the city on our balance sheet, participation in various social and charitable programs.

As part of the completed investment program, we have solved an important environmental problem - we have provided a closed loop water supply to our plant. Thus, we will save water resources by 30%, and on the other hand, we will ensure the environmental protection of the transboundary Araks River. And this is despite the fact that previously also all environmental norms were within the framework of legal requirements. In any case, we minimize the risks of the plant's environmental impact on the environment.

- Thank you for the interesting conversation. And keep your stress resistance at a high level, it is possible that this quality will be useful to you more than once.