In 2025, Armenia will allocate almost $ 1.4 billion for government debt repayment and services 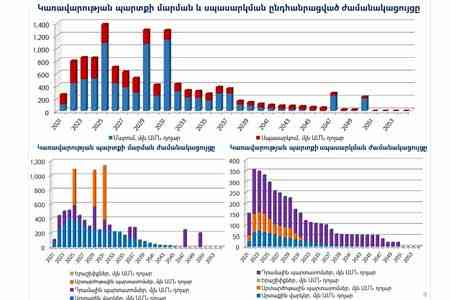 ArmInfo.According to the data of the RA Ministry of Finance, in 2025, Armenia will have to send almost $ 1.4 billion for the government debt repayment and services  (excluding the debt of the Central Bank of Armenia), formed at  the end of August 2021.

At present, in the structure of government debt, 75.6% are debt  obligations in foreign currency.

The national debt is stable and manageable! Ministry of Finance of  Armenia assures!

As head of the Macroeconomic Policy Department of the RA Ministry of  Finance Eduard Hakobyan stated on the air of Public Television, the  annual comprehensive diagnostics of debt risks shows that, despite  the increase in the debt burden that occurred during the crisis  period (pandemic, war in Artsakh, Ed. note), the reaction of the  financial authorities was adequate to the existing conditions. "As  estimates show, debt is still in the area of manageability and  stability," he said.

Representative of the legislative branch, the head of the Standing  Committee on Financial, Credit and Budgetary Issues of the National  Assembly Gevorg Papoyan, in turn, said on the air of Public  Television that in the conditions of war and a pandemic Armenia could  follow the path of massive cost cuts, or pursue a stimulating fiscal  policy, then there is - to carry out the main expenses, filling the  gap with credit resources. The government, according to him, chose  the second path, since the first led to a greater economic recession  (at the end of 2020, Armenia recorded a decline in GDP of 7.4%, Ed.   note). More important is how effectively and in what directions the  borrowings were spent, Papoyan said, pointing out that large sums  were invested in fixed assets, which in the long term promises the  country economic growth and, consequently, the ability to painlessly  service the state debt.

At the same time, according to the representative of the Ministry of  Finance, the framework established by the RA law is very flexible -  in crisis conditions it allows one to deviate in a certain way, and  after making a number of adjustments to the current policy, to return  to a given channel. In particular, over the next 5 years, the  Ministry of Finance plans not only to return to the permissible  limits, but also to reach the mark of 54% of GDP.

The beauty of a debt is its payment

As ArmInfo previously reported, referring to the Strategic Program  for Government Debt Management for 2022-2024, it is until the moment  of payments on the state debt in 2025 that Armenia plans to carry out  the next and fifth tranche of Eurobonds in the international market  in 2024. The funds received from the emission of Eurobonds will be  used to buy back bonds of 2025 maturity.  Meanwhile, as evidenced by  the data of the RA Ministry of Finance on the schedule of repayment  and servicing of government debt until 2053, the state budget of  Armenia is to be "tested for strength" both in 2025 and in 2029 and  2031. Then the financial system of the republic will have to "lay  out" about $ 1.3 billion.

Lenders have a good memory:

In January-August of this year alone, 104.2 billion drams were allocated  to pay interest rates on the government debt.