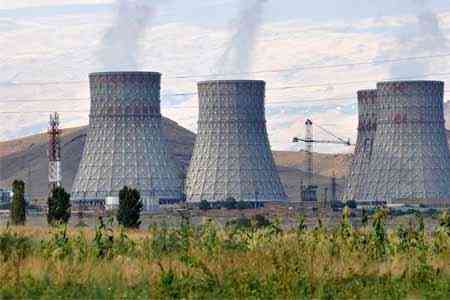 According to the specialist, the matter concerns the construction of  a low-power reactor, which must be built by the end of the service  life of the 2nd unit of the Armenian (Metsamor) NPP. As Sviridenko  noted, literally in the near future, the process of modernization of  the 2nd unit will be completed and a license for its operation until  2026 will be obtained. The Rosatom Corporation will participate in  the process of technical operation of the plant and maintaining a  high level of its safety, as well as in fulfilling the task of  further extending the life of the reactor until 2036.

As it was said at the round table, practice shows that the station  can be operated until 2036 with the implementation of certain  measures to further improve its safety. It is by this time that the  government and the Corporation are planning to launch a new unit of  small nuclear power plants operating on the basis of the modernized  RITM-200 water-cooled nuclear reactors, which are designed to be  installed on icebreakers and prospective floating nuclear power  plants, which the Rosatom Corporation intends to install.

To note, in his interview to the "Rosatom" information portal, Yury  Fadeyev, the Chief Designer of Pressurized Water Reactor Plants in  "Afrikantov OKBM"JSC ( "Afrikantov Experimental Design Bureau for  Mechanical Engineering, Nizhny Novgorod )  noted that the Bureau has  embarked on a project to adapt its product for land-based nuclear  power plants.

<If we talk about medium-power NPPs, then a set up to a level of  several hundred megawatts is possible due to the installation of  several RITM-200 reactor units in a modular design. This is now one  of the global trends, "he said. According to him, Rosatom is thinking  about creating ground power units with RITM-200 because there are  many potential consumers of this power level (150-200 MW - Ed. note),  primarily abroad.

We also note that on December 23, 2020, Rosatom State Corporation and  the Government of the Republic of Sakha (Yakutia) entered into an  agreement that enshrines the principles of tariff setting for  electricity within the framework of the project for the construction  of a low-power nuclear power plant (ASMM) based on the RITM-200  reactor in the village of Ust -Kuyga of the Ust-Yansky ulus. Earlier  in 2020, the field stage of the survey was completed, now office work  is underway. The project for the construction of a nuclear-powered  nuclear power station in Yakutia is based on Rosatom's reference  technology with RITM- 200 reactors, designed taking into account many  years of experience in operating small reactors on ships of the  Russian nuclear icebreaker fleet. On October 21, 2020, the flagship  icebreaker of the new generation Arktika with such reactors became  part of the nuclear fleet, it is already operating on the routes of  the Northern Sea Route. Six more RITM-200 units have been installed  on Project 22220 icebreakers under construction.

To note, last month the first working meeting was held on the  repeated extension of the operating life of the ANPP power unit No.  2. The working group included industry companies and organizations  from Armenia and Russia. According to the official information, the  parties discussed the draft concept for the re- extension of the life  of the power unit No. 2, developed by the Armenian NPP. The  activities and approaches proposed in the framework of the PESP  concept of the Armenian NPP were analyzed, as well as the approaches  that were used when re-extending the service life of NPP power units  with WWER-440 reactors in Russia, in particular, power units No. 1, 2  of the Kola NPP, power unit No. 4 of Novovoronezh NPP.

"Our common task, together with Russian atomic scientists, is to  maximize the safety, reliability and efficiency of the Armenian NPP  operation. Preliminary calculations have already been made, according  to which the plant can be additionally operated after 2026, "noted  Eduard Martirosyan, General Director of ANPP CJSC.

The Armenian NPP consists of two units with Soviet (Russian) WWER  reactors. The first unit was commissioned in 1976, the second in  1980. In March 1989, after the Spitak earthquake, which killed 25  thousand people, the work of the station was stopped. In November  1995, in connection with an acute energy crisis, the second power  unit of the station with a capacity of 407.5 MW was put into  operation. In March 2014, the Armenian government decided to extend  the life of the second unit.