Another intermediate subway station to be built in Yerevan 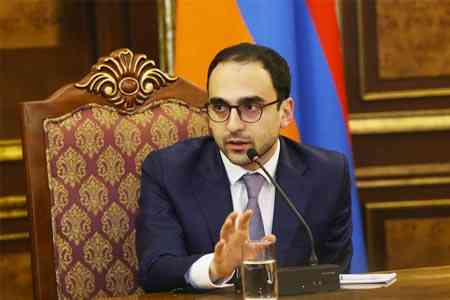 ArmInfo.In addition to the large-scale project for the construction of the Ajapnyak subway (metro) station, an intermediate subway station near the Petak  shopping center is planned to be built in Yerevan, as well as Armenia  will purchase 250 new electric buses. Former Deputy Prime Minister of  Armenia, Chairman of the Board of the Armenia National Interests Fund  (ANIF) Tigran Avinyan wrote  on his Facebook page.

"These programs will significantly transform the entire transport  system of Yerevan, solve the problem of air pollution, which has  become a serious threat to the city," he said.

In this context, Avinyan said that within the framework of the EBRD  Annual Meeting, he met with the EBRD Regional Director for  Infrastructure Programs in Eurasia, Ekaterina Miroshnik, as well as  and ERBD Regional Director for the Caucasus Catarina Hansen. During  the meeting they discussed the possibilities of financing the  abovementioned programs.

At the same time, as Armenia National Interests Fund (ANIF) reports,  at the Annual Meeting and Business Forum of the European Bank for  Reconstruction and Development (EBRD), Tigran Avinyan also met with  Bella Manukyan, Director of ANIF's"Entrepreneur + State" Investment  Fund.  According to the source, the EBRD Annual Meeting is a platform  for networking and exploring of cooperation opportunities between  representatives of the Bank's member countries, partner  organizations, business and civil society, as well as for discussions  around economic issues and sustianbaility agenda.

The EBRD is a long-term partner for the Republic of Armenia. Over the  years, the Bank has invested more than $ 1.6 billion in Armenia in  more than 195 projects in the fields of infrastructure, energy,  agriculture, finance and more.ANIF cosiderns the role of the  International Financial Institutions in the investment landscape of  Armenia and the standards they imply of outmost importance. There are  a number of potentially interesting areas for cooperation  opportunities with EBRD and ANIF is glad to continue the discussions  around those.

It should be noted that the EBRD is the leading institutional  investor in Armenia. The bank has invested over 1.6 billion euros in  more than 195 projects in the financial, agricultural, infrastructure  and energy sectors of the country. Moreover, 91% of these investments  fell on the private sector.

Earlier, on April 28, at a government meeting, Armenian Prime  Minister Nikol Pashinyan announced that the practical stage of the  construction of the Ajapnyak subway station had begun.  At first it  was planned to take a government decision on this issue, but the  situation has changed. "The government should finance the  construction. However, we recently saw that, within the framework of  one of the criminal cases, the city budget was compensated for damage  in the amount of about 850 million drams (about $ 1.8 million).   During the discussions, it was decided that the amount at the first  stage, 750 million drams, will be directed to these purposes",  Pashinyan explained, specifying that the criminal case is connected  with the activities of the Parking City Service.  Yerevan Mayor  Hrachya Sargsyan, in turn, replied that the project would be  implemented in 510 days, and maybe even earlier. At the end of  November 2021, it was reported that the leading Russian  Metrogiprotrans company has won a tender announced by the Yerevan  Municipality for the development of the Ajapnyak subway station in  the same name administrative district of the Armenian capital.  As  former Mayor  of Yerevan Hayk Marutyan of Yerevan pointed out, the  preliminary version of the project  envisages the construction of a  bridge across the Hrazdan (river, ed.  note) only for the subway,  while Metrogiprotrans also proposes to  build a second level for cars  or pedestrians. As the interlocutors  pointed out, the construction  of an underground subway station is  preferable, since it is much  more convenient for people using the  subway and allows the  development of various infrastructures.  President of the Board of  Directors of Metrogiprotrans Valery Abramson, proposed to the  Armenian government a project for the development of a subway worth $  500 million.  "The Russian Agency for Export Credit and Investment  Insurance (EXIAR) is ready to support the program on favorable terms.   With these funds, we will be able to modernize the infrastructure of  the old subway, as well as plan those sections of the city towards  which the stations can be expanded," Abramson said.

Earlier it was reported that if the loan agreement with EXIAR is  approved, construction work will last about 1.5 years.  According to  the city authorities' plan, the path to the new subway station with a  length of 525 meters should pass through a tunnel, the construction  of which began in Soviet times and remained unfinished. Then the  Ajapnyak station remained unfinished, in the project  its  continuation from the Davitashen district on the north-western  outskirts of the city.