Will exporters wait for help from state, or will Armenian economy be  fried in monetary frying pan? 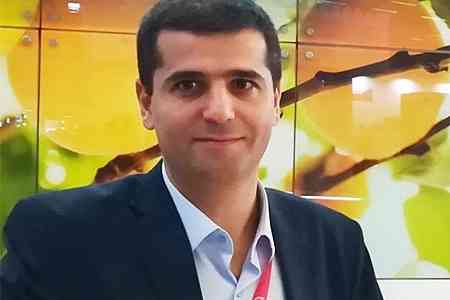 ArmInfo.Manufacturers-exporters, providing 20% of Armenia's GDP, are going through extremely difficult times. The sharp revaluation of the dram (from 470-480 drams at the  end of February and an increase to 520 in early March with a decline  to about 400-410 drams per $ 1) became a real test for exporters of  goods and services, as well as for investors and small local  producers.

"Sustaining the current situation will nullify all  efforts to diversify sales markets and will make Armenian exports  more dependent on the Russian market," Emil Stepanyan, founder of the  Export Armenia Association, told ArmInfo in an interview.

Reaching out to the authorities seems impossible

The expert recalls that on June 24, representatives of the Armenian  business published an open letter in which they called on the  economic authorities to take urgent measures to save businesses that  have fallen victim to a sharp revaluation of the national currency.  Export Armenia proposed to implement targeted programs to support the  sectors of the economy most affected by the revaluation of the dram.  These are IT companies, exporters and local manufacturers. The latter  also suffered, as the Armenian dram, which revaluated against the  dollar by more than 15%, made imports of finished products more  attractive by at least the same 15%. With the cost of goods falling,  importers have freed up funds for marketing activities and have more  opportunities to push local products out of supermarket shelves.

Meanwhile, according to Stepanyan, the margin for some exporters does  not even reach the indicated 15%.  < After all, if you look closely,  export is not about a margin, it is about a large amount of goods for  a small margin. There is a lot of competition in foreign markets, and  therefore in many countries, and primarily European ones, local  producers use various protectionist tools provided by the state, and  it is very difficult for us, as exporters, to play in a foreign  field, making our way to the shelves of foreign supermarkets>,  he  thinks. As a result, the Armenian exporter, in order to enter foreign  markets, and in order to win his place under the LED markets, has to  reduce the prices of goods as much as possible and sell them at a  minimum margin.

The appreciation of the dram also weakened the inflow of foreign  direct investment into Armenia, since in order to achieve the planned  result, it is necessary to increase the capex by at least 20%, which  completely changes the investment programs and may lead to  significant losses in the future.

Losses in millions of dollars

Due to the deep revaluation of the dram, exporters supplying goods  and services to countries where dollars and euros are in use today  are at risk of losing hard-won new markets. Some are trying to  negotiate for it to be postpone, some are working at a loss, covering  with sales on the local or Russian market. The situation is  catastrophic, especially for exporters in euros, as the dram has  appreciated by more than 25% against the European currency.

As a result, Armenian products have risen in price in foreign  markets. However, as the expert notes, not only Armenian exporters  revised the prices for the supplied goods. But our exporters have no  room for great maneuvers in the competing countries, especially in  the Russian market, where there was no such sharp revaluation of the  national currency. < Armenian exporters should set prices based on  the prices set by competitors. However, if the dollar devalues by  15-20%, prices can be increased by a maximum of 5- 7%. Next will be  the shock," Stepanyan explains. As a result, the market  diversification process, even if most of the volumes are small,  sometimes even symbolic, threatens to come to nothing.

According to the representative of Export Armenia, according to  approximate estimates, the losses of exporters amount to millions of  dollars. <If you count offhand, we have $3 billion in exports, on  average $250 million per month, in 2 months (from the moment the dram  has appreciated against the dollar) the amount reaches $500 million,  and a 15% depreciation of the dollar costs exports $75 million. The  State Revenue Committee can calculate what part of exports is in  dollars, what is in Russian currency>, he notes.

How beneficial is it for exporters to the Russian market?

"A third of the entire Armenian market and 70% of finished products  from Armenia go to the Russian market, and, of course, they really  benefit from strengthening the positions of both the Armenian dram  and the Russian ruble," Stepanyan notes. At the same time, he recalls  that the Russian ruble began to rapidly depreciate against the US  dollar at the end of February against the backdrop of the  Russian-Ukrainian conflict and Western sanctions. Its rate has almost  doubled - up to 120 rubles for $1. And only by May 25, its rate  rolled back to the level of 55 rubles per $1. During this period,  Armenian exporters lost a lot. In this situation, according to  Stepanyan, the government is simply obliged to support its exporters,  since the current situation is force majeure for everyone.

To support or not? It's a matter of prioritization

An open letter to the financial and economic authorities was followed  by a meeting between the business community of Armenia and the  ministers of economy and finance, Vahan Kerobyan and Tigran  Khachatryan. <At the end of the meeting, we were asked to meet again.  I don't think there will be another meeting. At the last meeting, we  were made clear that no support programs were being discussed, at  least at that time>, Stepanyan says.

However, the other day, Deputy Minister of Economy Ani Ispiryan  proposed in parliament to subsidize exporters by at least 50 drams  per dollar, given that the US currency depreciated by almost 100  drams.  "Either we subsidize or reduce the exchange rate of the  dram," Ispiryan said.

<We were pleasantly surprised by the proposal of the Deputy Minister.  We hope that the intentions of the Ministry of Economy are serious,  and not according to the principle - we wanted, we were refused. We  also hope that the decision will be made at a higher level. We will  continue to promote our interests>, Emil Stepanyan says.

He recalled that Armenia has set export as a priority. "It is  precisely at the moment when the sector needs support most of all  that the government hesitates. The state can take the opportunity to  start implementing business support programs>, he emphasizes.

At the same time, as Stepanyan emphasized, at present the priority of  the government is to avoid social tension in every possible way. <If  citizens dissatisfied with social policy also joined the recent  protest actions, perhaps the actions of disobedience would develop  into something more. Based on this, we believe that the government  will by no means follow the path of revaluation of the dollar and  devaluation of the dram, which will lead to an increase in inflation.  At the same time, we consider it wrong to artificially maintain the  exchange rate of the national currency," the expert says. In this  case, the best way out is subsidizing.

Will foreign exchange interventions and lowering the refinancing rate  help?

The co-founder of the Association does not support the idea of  holding foreign exchange interventions and reducing the refinancing  rate in order to save the situation with exports. "If you have a  point pain in any organ, you should not take medicine for the whole  body, which will also have many side effects," he says.  Stepanyan  urges not to forget that the dollar component in Armenian goods is  significant.  For examplelocal manufacturers, for the production of  Armenian products, import raw materials, components, and fuel from  abroad. In addition, exporters also pay for logistics in dollars. A  strong revaluation of the US dollar could be beneficial for exporters  of primary agricultural products, he notes.

He sees the solution to the issue in subsidizing vulnerable areas of  the export sector of the economy, or by deducting taxes, implementing  targeted and marketing activities for the purchase of equipment. .  "Programs can be different for everyone, taking into account the  specifics of their field," he notes.

The co-founder of the Association also recalls that in early May the  government announced the launch of a regular ferry service from the  Georgian port of Poti to the Russian port of Kavkaz, and promised to  launch it from June 15. As part of this initiative, it was announced  that the state intends to subsidize this ferry transportation of  goods. However, this was not done by the deadline. <The funds planned  for these purposes can be redirected to other ways to support  business sector, for example, to implement targeted assistance  programs, purchase modern equipment, technologies and marketing  activities that will strengthen the positions of Armenian  manufacturers and their competitive advantages. As a result, the cost  of goods and services will decrease, the margin will increase, the  potential of local business will increase, which will lead to an  increase in production and, accordingly, tax revenues to the state  treasury>, the expert explains. In any case, the expert of Export  Armenia is confident that the government should support its  exporters, since the current situation is force majeure for everyone.

What will happen if:

According to Stepanyan, if the current situation continues until the  end of the year, we will have exports that are one-sidedly dependent  on the Russian market. In this case, with a possible fall in the  ruble exchange rate, the scenario of 2004-2008 will be repeated, when  the Armenian dram from 500 drams fell to 300 and all Armenian  exports, the IT sector and even the institutionally developed cutting  industry in the country and everything that was supported by tolling,  went out the window.