Armenia is not ready to open the land border with Turkey: Expert 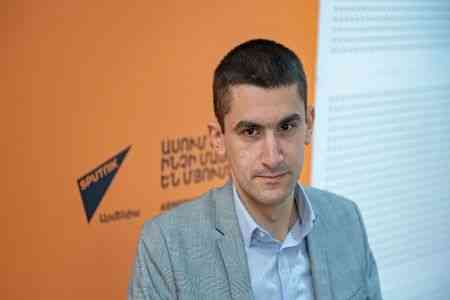 ArmInfo.At this stage, the opening of the land border with Turkey will have a negative impact on the Armenian economy. By opening the doors to the Turkish market, the  country today risks incurring losses in a number of sectors of the  national economy. Economist, expert of the AMBERD Research Center  Hayk Bejanyan, stated this in an interview with an ArmInfo  correspondent.

Meanwhile, the expert noted that open land borders with neighboring  countries are an important agenda for any state, since any road opens  the way to new opportunities, at least at the level of expectations.  And in this context, the unblocking of the borders with Turkey is no  exception.

According to Bejanyan, in this context, last year, when the process  of normalizing Armenian-Turkish relations was launched, the experts  of the AMBERD Research Center conducted a study of the economic  prospects for opening the border and assessed the possible risks  associated with it. Studies, however, have shown that at this stage,  the opening of the border with Turkey for certain sectors of the  Armenian economy contains more risks than opportunities.

At the same time, the economist admits that sooner or later the  borders between Armenia and Turkey should be opened. However, this  should be done carefully and without undue haste: only after a series  of preparatory work has been carried out and a certain protection  shell has been formed for especially vulnerable sectors of the  Armenian economy. "After all, to open the doors to the huge Turkish  market, being unprepared, means voluntarily giving up the local  market to foreign products and putting an end to the development of  vital sectors of the domestic economy. This will raise the issue of  the viability of a number of industries, in particular agriculture,  since cheaper Turkish agricultural products threaten to displace  local ones, which will negatively affect the well-being of the  population and the economy as a whole", he notes.

Nevertheless, according to the expert, there are also positive  aspects in deblocking communications, especially at this stage, when  numerous communication routes and supply chains have been disrupted  in the conditions of international turbulence. In this perspective,  there are separate areas, specific businessmen who will benefit from  the opening of borders. For transport workers, for example, this will  mean expanding transit opportunities, access to the sea and reducing  travel time. However, according to the economist, if we are talking  about the global interests of the state and its economy, we need to  consider the issue in a comprehensive manner, and not be guided by  the interests of individual segments of the economy.

As for the assessment of the Ministry of Economy and its head Vahan  Kerobyan that in the medium term the effect of economic growth from  opening the borders with Turkey may reach 30%, then, as Bejanyan  noted, when such estimates and specific figures are voiced, it would  be appropriate to inform the public about specific studies underlying  such assessments.

Nevertheless, the expert is convinced that at this stage Armenia is  not ready to open the land border with Turkey. "In order to take such  a step, Armenia, at least at the experimental-analytical level,  should be confident in its effectiveness. We need to clearly assess  the capabilities of the sectors of the economy and understand in  which areas the Republic of Armenia will be most vulnerable.  Legislation should then be developed to protect the domestic  producer. It is necessary to think about the introduction of  assistance mechanisms, in particular, subsidies, tariff policy, which  will provide opportunities for stable growth for Armenian business  entities, and not rely on chance with the emergence of new external  players in the local market", Hayk Bedjanyan sums up.