CBA: High demand leads to the expansion of the inflationary  environment and maintenance of high inflation expectations, but dram  appreciation partially neutralizes the price increase 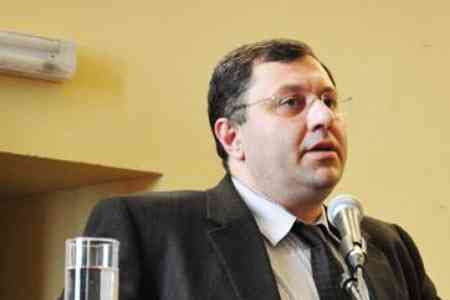 ArmInfo.On August 2, the Board of the Central Bank of Armenia decided to raise the refinancing rate by 0.25 percentage points to 9.5%. At a press conference on  these issues, Deputy Chairman of the Central Bank of the Republic of  Armenia Nerses Yeritsyan noted that in Q2, disruptions in global  value chains continued, and economic activity in Armenia's key  partner countries is slowing.

According to him, inflationary pressure on the international  commodity market has eased somewhat, but prices remain at  historically high levels. "The central banks of developed countries  continue to tighten monetary conditions. This will gradually curb the  global inflationary environment. Thus, the inflationary impact coming  from the external sector on the Armenian economy will somewhat  weaken, but will still persist in the near future," he noted, adding  that in June 2022 the official y-o-y inflation continued to grow and  reached 10.3% (from 6.5% a year earlier, ed. note), and the core  y-o-y inflation increased in June to 9.4% (from 7.8% a year earlier,  ed. note).

Yeritsyan drew attention to the fact that in Q2 2022, the Armenian  economy showed higher activity - 14% per annum, rather than the  expected 7.1%. "This was especially evident in the service sector,  where monitoring revealed a 19.4% y-o-y growth in Q2, instead of the  expected 9.8%. Positive changes were also registered in the industry  sector and the export of goods and services. In particular, the  monitoring of the industrial sector showed 6.9% y-o-y growth in Q2,  against the expected 1.9%. Tax collection, according to monitoring,  increased in Q2 by 13.2% per annum, against the expected 4% growth.   The construction sector in the reporting quarter showed 22.6% y-o-y  growth, which fully met expectations," Yeritsyan said, noting that in  September the Central Bank will revise the forecast GDP growth in  Armenia for 2022 towards a higher rate from the previous 4.9%. In  doing so, he pointed out that demand-driven factors dominated the  high economic growth: "The latter continues to be largely driven by a  sizable influx of international visitors and remittances from Russia.   High demand leads to an expansion of the general inflationary  environment and maintaining high inflationary expectations,"  Yeritsyan said, noting that the revaluation of the Armenian dram  partially neutralizes the inflation growth.  In this situation, the  Board of the Central Bank considered it expedient to raise the  refinancing rate this time. To stabilize inflation and neutralize any  risk of anchoring inflationary expectations, the Central Bank Board  will consistently take the necessary steps. Under the scenario  envisaged in the monetary policy, y-o- y  inflation will gradually  decrease and in the medium term will approach the target threshold of  4%.

"According to the assessment of the Central Bank Board, the  uncertainty associated with macroeconomic prospects remains. At the  same time, the risks of inflation deviating from the planned  trajectory are basically balanced. In case of risks of any direction,  the Central Bank Board will react properly to ensure price  stability," he concluded.

The forecast of the Central Bank, updated at the end of June,  foreshadowed inflation at the level of 8.5% for 2022 (against the  actual 7.7% in 2021), with the target of 4% approaching in 2024.  Furthermore, the CBA's forecasts have changed compared to the March  version of the report, in particular, in terms of inflation, instead  of the previously expected 6.6% in 2022, the updated June version has  a higher level of 8.5%, and the projected GDP growth, on the  contrary, has improved from the previous 1.6% to the updated 4.9%.

The June 2022 forecast reflects new challenges against the backdrop  of the Russian-Ukrainian military-political conflict and  comprehensive, unprecedented, large-scale US and European sanctions  against Russia, the share of which  in the main macroeconomic  indicators of Armenia dominates.

According to the Central Bank of the Republic of Armenia, the share  of Russia in the inflow  in H1 2022 incresed to 60.5% from 39.6% in  H1 2021 (vs. 32.7% in H1 2019). And the share of the United States,  on the contrary, decreased both in inflow- in y-o-y terms from 27.4%  to 17% (against 14.7% in H1 2019), and in outflow from 16.3% to 14.7%  (against 20 .4% in H1 2019).  It is appropriate to note that the  surge in transfers from Russia to Armenia was provoked by the massive  arrival of Russians along with the transfer of their capital.   Moreover, on monthly terms, a significant increase in the net inflow  of transfers from Russia began to be observed already in February (a  3-fold increase), continuing to grow at a rapid pace in the following  months. Such an increase in transfers is explained by the arrival of  a huge number of Russians in Armenia who, due to the  Russian-Ukrainian conflict and anti-Russian sanctions applied by the  West (including disconnection from the S.W.I.F.T., withdrawal of Visa  and MasterCard from the market, blocking of Western social networks)  faced difficulties in work, financial and card transactions in their  homeland.

In confirmation of the aforementioned, experts cite statistics of  companies opened in Armenia in April-May, the number of which has  increased significantly after the arrival of the Russians, and most  of them, in order to avoid anti-Russian sanctions, migrate and move  their capital. "In addition to business purposes, Russians spend  money in Armenia on recreation, entertainment, rental housing, etc.   These funds, in turn, spur growth especially in the service sector,  as well as in the real estate market and the trade sector.  As a  result, an increase in economic activity in Armenia in the first half  of the year by 11.8% per annum, to a greater extent came from the  growth of the service sector by 26.9%," experts say, stating with  confidence that this increase is caused by the arrival of such a  large number of Russians. But how long the growth of remittances and  how long-term - the stay of Russian citizens will be in Armenia,  according to experts, depends on the outcome of the Russian-Ukrainian  conflict and the West's mood to ease sanctions against Russia.