EADB to allocate $37mln for construction of 11 solar power stations 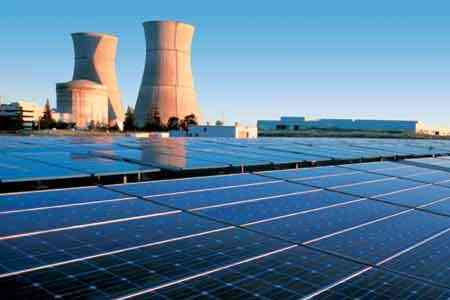 ArmInfo. The Eurasian Development Bank (EADB) will allocate up to $37mln for the  construction of 11 solar power stations with a total capacity of 65  MW in the Gegharkunik and Aragatsotn provinces of Armenia.

'EADB Board Chairman Nikolay Podguzov and President of the New Energy group of  companies Hayk Harutyunyan signed the relevant documents in Yerevan.  The facilities are to be commissioned this year. The investments will  be returned due to payments under electric energy contacts between  the borrower and the Electric Networks of Armenia CJSC.

The development of renewable energy sources is a priority of the  Armenian government's energy strategy as it reduces the country's  dependence on mineral resources. Armenia's energy strategy for  2021-2024 gives priority to renewable energy development. The  potential of Armenia's solar power stations is estimated at 8 GW.  Talking to ArmInfo, Mr Harutyunyan said that, under the most  "conservative scenario", Armenia is capable of bringing the solar  energy output up to 1,000 MW by 2039.

According to Mr Podguzov, Armenia's energy sector is based on nuclear  and thermal energy, as well as water power. Natural gas is the  principal energy carrier in the general final consumption.

"According to our bank's strategy in Armenia, the focus is both the  construction projects of solar energy generation facilities and  construction and modernization of water power facilities. Thee bank's  task is facilitating further diversification of energy generation  facilities in the country until 2026. Thus, we are not only enhancing  the reliability of the energy sector but also improving the  environment by reducing carbon emissions," Mr Podguzov said.

Armenia plans to commission commercial-scale solar power stations  with a total capacity of 219.5MW by the end of 2023. Among them is  $58mln worth Masrik 1 in Gegharkunik, as well as five smaller  stations.  By 2025, the project of construction of the largest solar  power station in Armenia, Ayg 1, with a design capacity of 200MW, in  Kotayk is to be completed. The construction project is part of the  programme of electric energy development until 2040.