EBRD improves its 2022 GDP growth forecast for Armenia from previous  4.5% to updated 8% 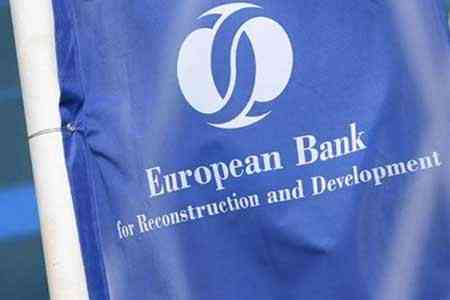 ArmInfo.The European Bank for Reconstruction and Development (EBRD) has improved its 2022 GDP growth forecast for Armenia from the previous 4.5% to an updated 8%,  thereby expecting more sustainable growth.

At the same time, according to the new EBRD forecasts, the slowdown in 2023 will be  less gradual - to a likely 4%, and this growth estimate also exceeds  the previous forecast of 2.5%. The European Bank for Reconstruction  and Development (EBRD) reports in its latest Regional Economic  Prospects (REP) today.

In particular, the EBRD notes in its report : "In Armenia, the solid  recovery seen in 2021 carried strong growth momentum into 2022, with  economic growth reaching 13.1 per cent in the period from January to  July. As in Georgia, the arrival of many people and firms from Russia  led to an increase of 113 per cent in foreign inflows and boosted  demand for services.  This has helped Armenia to finance its widening  trade deficit. Foreign reserves have also increased by 20 per cent  and the exchange rate by 18 per cent.'

The EBRD makes a similar forecast for the economy of Georgia in 2022,  which is also significantly higher than the previously expected 3%.  And for 2023, as in the earlier forecast, the EBRD forecasts  a  slowdown in Georgia's GDP growth to 5%. The report, in particular,  notes: "In Georgia, robust growth of 10.3 per cent is supported by a  pickup in tourism, which has almost reached pre-pandemic levels, and  by an increase in money transfers (boosted by the temporary inflow of  Russian businesses and technology-sector professionals). These trends  have helped to cover Georgia's trade deficit and supported the  appreciation of the lari, leading to an increase in foreign reserves.  The growth is expected to continue, albeit at a slower pace of 8 per  cent in 2022, which remains significantly higher than the 3 per cent  growth previously predicted.  For next year, the report expects this  trend to moderate further to 5 per cent, in line with the previous  forecast."

Georgia's current robust economic growth of 10.3% is being supported  by tourism growth, which is nearing pre-pandemic levels, as well as  increased remittances (bolstered by a temporary influx of Russian  businesses and tech sector professionals). These trends helped cover  Georgia's trade deficit and contributed to the appreciation of the  lari, which led to an increase in foreign exchange reserves.

At the same time, the EBRD kept expectations for Azerbaijan's GDP  growth for 2022 and 2023 at the same level (as in the May forecast) -  4.5% with a slowdown to 2.5%. The report, in particular, notes:  "In  Azerbaijan, the strong performance of the non-energy sector led to  6.2 per cent growth during the first seven months of 2022. The rising  prices of hydrocarbons almost doubled export revenue, leading to  large current-account and budget surpluses.  High energy prices are  expected to support the country's economic growth in the near term.  The May forecast of GDP growth of 4.5 per cent for 2022 and  moderation to 2.5 per cent in 2023 remains unchanged."

The EBRD sees this in raising growth forecasts for the three  countries for 2022, while expecting a slowdown in 2023. But the EBRD  warns that the current economic growth in the Caucasus is largely due  to temporary factors that could easily be reversed.

The report notes, in part:  "The economies of Armenia, Azerbaijan and  Georgia are enjoying some of their highest growth rates in years.   Azerbaijan is capitalising on high levels of oil and gas revenues, as  a result of elevated prices and increased export revenues, but also  on the strong performance of its non-energy sector.  Meanwhile,  Armenia and Georgia are benefiting from an inflow of Russian  businesses and information and communication technology (ICT)  professionals, boosting the service sectors of these small economies.   However, the robust growth recorded for the region in 2022 will taper  off in 2023, highlighting concerns about its medium- term  sustainability. The report warns that current growth in the Caucasus  is mainly driven by temporary factors that could easily be reversed.   For Azerbaijan, the uncertainty stems from energy prices but also  from inflation. For Georgia, however, the risks are driven by  uncertainty and the significant probability of external shocks. In  the case of Armenia, these are further amplified by the country's  close ties to an increasingly isolated Russian economy."

Inflation in Caucasus has gained its momentum

"During the first half of 2022, inflation in the Caucasus gained  momentum due to a new wave of price rises for energy and food. The  central banks of all three countries responded by raising their  policy rates.  Inflation has now fallen to an average of 10 per cent,  which is still high but significantly lower than the average of 16.5  per cent across the EBRD regions as a whole.

Overall, the EBRD predicts growth of 2.3 per cent in output across  its regions in 2022. While this is an upward revision of 1.2  percentage points relative to its May forecast, the Bank warns of  subdued growth in 2023, revising projected growth figures down by 1.7  percentage points to 3 per cent."

It should be noted that according to the September forecast of the  Central Bank of Armenia, expectations for GDP growth for 2022 have  significantly improved - from the previous 4.9% to the updated 12.9%.  This was announced by the Central Bank of the Republic of Armenia on  September 13, the same day the refinancing rate was increased from  9.5% to 10%. Moreover, the Central Bank announced its forecast before  the start of Azerbaijan's military aggression against Armenia this  month, and in fact this factor was not taken into account in the  expectations of macroeconomic indicators.