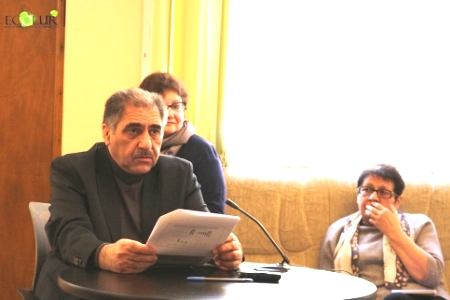 ArmInfo.The implementation of the Meghri hydroelectric power plant construction project on the Araks river bordering Iran is already in serious doubt.  Director at   Energy Strategy Center at Scientific Research Institute of Energy of  the Republic of Armenia Vahan Sargsyan told in an interview with  ArmInfo correspondent.

According to him, although the project is beneficial for both Iran  and Armenia, there is no activity in that direction today. Initially,  it was planned that the cascade, which was supposed to consist of two  HPPs (one on the territory of each of the parties with the use of a  diversion tunnel) would be built by the Iranian side, and for this  reason, the entire cascade was to belong to the Iranian side until  full repayment by Armenia of all costs associated with construction  by supplying electricity to a neighboring state. 15 years later,  after the commissioning of the facility, the HPP on the Armenian side  was to become the property of the RA. "Now there is no activity in  this direction," the specialist noted, adding that the construction  projects of the Lori-Berd and Shnogh hydroelectric power stations  could suffer a similar fate.

Sargsyan noted that there are disagreements in government circles on  the issue of the Shnogh and Lori-Berd HPPs, some consider the project  important and insist on its inclusion in the Cabinet's program, while  others, on the contrary, point to the importance of building small  hydroelectric power plants instead of these generating facilities.  "By and large, both of these projects are not entirely profitable  from an economic point of view, but they could become important  components of the country's energy independence from the energy  security point of view, since local raw materials would be used, in  this case, water," the specialist noted, adding that, in comparison  with other hydroelectric power plants, the construction of the Shnogh  and Lori-Berd HPPs will cost much more.

Sargsyan pointed out the importance of building pumped storage  stations. He recalled that back in Soviet times, the ArmHydroProject  Institute developed a project for the construction of a similar  station, which would have to accumulate electricity from the third  and fourth power units of the Armenian NPP, the construction of which  was envisaged, and it was planned to increase the units of the  Hrazdan TPP from 200 MW to 300 MW.  Then the problem of electricity  accumulation began to gain relevance.  ArmHydroProject Institute  carried out serious studies, according to the results of which the  territories for the construction of the pumped storage stations were  selected, which took into account the accumulation of water in  reservoirs on the upper and lower platforms.

However, these projects were not destined to come true. Subsequently,  in 1998, the Institute of Energy of the Republic of Armenia and the  ArmHydroProject Institute as well as a private organization conducted  joint studies, as a result of which five territories were selected,  where the construction of the pumped storage station was envisaged.  True, at that time the environmental component was not considered,  since it was envisaged to leave this issue for a comprehensive  decision. Today, an option is being considered, according to which,  next to the existing hydroelectric power plants, it is planned to  build pumping stations, with the help of which water from low  reservoirs will be directed to upper reservoirs. This project is  still under discussion, and there are all grounds and justifications  for the construction of these facilities, but it is necessary to  carry out serious scientific research works for the justification of  its construction..

As for the Iran-Armenia-Georgia-Russia electric power corridor, as  the specialist emphasized, the implementation of this project has  practically been stopped. There is no progress on this program <The  problem is under the constant control of the Armenian government, and  it is necessary to finally decide whether the work will be completed  or not. Today, one of the most discussed issues in the country is  whether Armenia needs a new nuclear power unit or not? It is my deep  conviction that it is necessary; but it is another matter when it  comes to the capacity of the new unit. Initially, when the project  was developed for a capacity of 1,000 MW, it was understood that a  significant part of the electricity produced from the new unit was to  be exported via a new 400-kilovolt power transmission line>, the  specialist said. He added that today the capacity of the current unit  of the Armenian NPP is 400 MW, and with the construction of a new  unit, the issue of exporting 600 MW of electricity would have to be  resolved. Previously, it was meant that the new transmission line  could serve not only Armenia, but also Iran and Russia, which could  carry out mutual power flows.   Sargsyan added that according to his information, the contractor of  the project, the Iranian Sunir company, had problems with the banking  system of Iran, which became a problem in the implementation of the  project, which is directly related to the sanctions imposed by the  United States and other Western countries against the Islamic  Republic.  It should be reminded that the Iranian Sunir company is  the contractor for the construction of the 400- kilovolt power  transmission line Iran-Armenia. The total cost of the project is  $107.9 million, of which 77% should be provided by the Export  Development Bank of Iran, and 23% by Sunir. It was initially planned  that the Armenia-Georgia power transmission line was to be built in  parallel, which would make it possible to establish the North-South  energy corridor, however, changes in the route scheme, developments  in the region constantly postponed the implementation of this program  worth 326.9 million euros, 10% of which were to be part of Georgia's  contribution.