Expert: Armenia has every chance of becoming one of transit hubs for  sale of products of Russian manufacturers and supply of necessary  products for RF 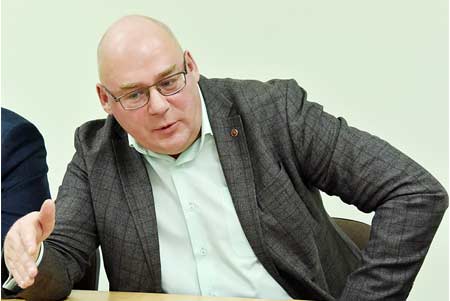 ArmInfo.Being at the heart of commodity flows, Armenia has every chance of becoming one of the transit hubs for the sale of products of Russian manufacturers and  the supply of necessary products for the Russian Federation. Andrey  Rusakov, a political scientist and director of the Center for  European-Asian Studies (Yekaterinburg) expressed a similar opinion  during a press conference on November 10.

He explained that the aviation and automotive industries were hit  hardest by sanctions in the Russian Federation, since most foreign  brands left, and only Chinese and Russian ones remained. However, the  matter is not only in the withdrawal of companies, but also in the  fact that the service maintenance of aircraft has ceased. There was a  need for spare parts, and Iran, being under sanctions for several  decades, has accumulated certain competencies in this sense. In this  context, Rusakov explained that the role of Armenia as a transit  country is increasing in terms of the supply of important components  for Russian industry from Iran to the Russian Federation.

The political scientist also recalled the discussions on the  formation by Iran of a transport corridor through the Black Sea with  the support of India. According to him, the transport corridor, with  the opening of a free trade zone between the EAEU and Iran, will  radically expand transit opportunities for goods from the EAEU  countries to conquer the East.

"We are at the peak of the formation of a new economic model. A holy  place is never empty. I believe that Armenian producers can do a lot  for themselves if they begin to actively develop, including the  Russian market," Rusakov emphasized.

It should be noted that Iran intends to connect its ports located in  the Gulf of Oman (port of Chabahar) and the Persian Gulf (ports of  Bandar Abbas, Imam Khomeini and Khorramshahr) in the south of the  country with ports located on the Black and Caspian Seas through the  Iranian railway network. The connection of the gulf with the Black  Sea will connect four key sea basins, namely, the Gulf of Oman, the  Caspian Sea (Iran-Azerbaijan), the Black Sea (Georgia, Bulgaria) and  the Mediterranean Sea (Greece). In the South Caucasus, Armenia is the  only country that is a member of the EAEU and therefore serves as a  direct bridge between Iran and the Union, which clearly underlines  the importance of the Persian Gulf-Black Sea international transport  and transit corridor for Iran