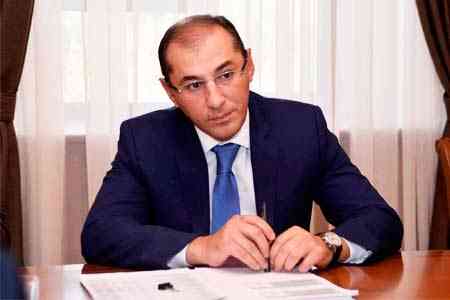 The current growth is due to temporary factors related to the development  of the situation around Ukraine. In the long term, we will not be  able to grow faster than this potential without some serious  transformations, increased investment activity, the growth of the  export-oriented sector, and if the geopolitical situation changes, we  risk being left with nothing. Former Minister of Finance of Armenia,  international consultant on public finance management Vardan Aramyan,  made this assessment in an interview with ArmInfo.

- Mr. Aramyan, according to the draft state budget for 2023, the  economic growth in Armenia in 2022 is projected at the level of 11%,  against the 7% planned by the state budget. At the same time, the  other day, Tigran Khachatryan, Minister of Finance, during the  presentation of the document in Parliament, said that growth is  likely to be revised upwards, based on statistical data for  January-September 2022. Prime Minister Nikol Pashinyan himself  announced the prospect of closing the current financial year with a  14% GDP growth. Meanwhile, over the past 20 years, the highest GDP  growth rate was recorded in 2005 at 13.9%. Can Armenia set a new  record?

Despite the fact that the statistical data of this year's  January-September 14.1 percent annual growth in economic activity  sounds very nice, in reality they carry significant risks, since they  are caused by external factors - the growth of visitors with "their  wallets", financial flows, parallel trading etc..

Thus, the growth of economic activity during 9 months was due to the  service sector - 27.1%, the trade sector - 14.5%, construction -  14.3%, the industry, which reached a double-digit growth of 10%, and  the agricultural sector experienced a decline of 0.7%. The foreign  trade turnover of Armenia increased by 62.5% per annum.

At the same time, the inflow of private transfers to Armenia in  January-September of this year reached a historical maximum - $3  billion 461.6 million were transferred to the accounts of individuals  from abroad through the banks of the Republic of Armenia, which is $1  billion 924.8 million more than in 2021 and $2 billion 183.1 million  more than in 2020. This growth was provoked by a significant increase  in the inflow of transfers from Russia (3.7-fold - up to $2.3  billion). At the same time, the outflow of transfers from Armenia  increased 2-fold- up to $1.8 billion. As a result, the net inflow of  private transfers to Armenia increased 2 .6-fold in y-o-y terms - up  to $1.7 billion. Moreover, the net inflow of transfers from Russia,  having increased 5.8-fold, reached $2.01 billion, and from the USA -  by 1.5% alone to $282.4 million.

During the same period, 1 million 240 thousand tourists visited  Armenia, compared to 619 thousand visits for the same period in 2021.   Almost half of them are visitors from Russia - 567,429 people (49% of  the total number of tourists).

Thanks to the abovementioned, I think that by the end of 2022 Armenia  will reach double-digit economic growth - in the amount of 12-13% or  even slightly higher. Should this be considered exclusively an  Armenian phenomenon? Definitely not. The economy of neighboring  Georgia grew by 10.2% in the first nine months of 2022.

Is this growth solely the result of certain actions of the Armenian  government? Again, no, and as soon as the external factors  contributing to this growth weaken or cease, our economy will face  significant difficulties. It is difficult to say when this will  happen, after a year, two or three, since this is directly related to  geopolitical developments. But the fact that we have demand-driven  economic growth is a fact, and it is dangerous.

- According to the draft state budget for 2023, GDP growth next year  will be 7%. As the head of government said in the National Assembly  on November 2, after a 14% growth in 2022, it will be difficult to  ensure a 7% growth in 2023, "but it can be solved." At the same time,  according to the forecast of the Central Bank, GDP growth in 2022  will be 12.9% with a slowdown in 2023 to 4.5%.  Meanwhile, the IMF  recently reduced its global economic outlook for 2023 to 2.7% from  2.9% forecasted in July. It was noted that the economic slowdown in  2023 will affect everyone: it is expected that the growth of the  countries that account for a third of the world economy will decrease  this year or next year. In short, the worst is yet to come. And for  many of us, 2023 will be associated with a recession. What is your  forecast, against this background, how realistic is it for Armenia to  ensure a 7% growth next year, given the high base in the current one?

If we are sure that the factors contributing to the growth of the  economy in 2022 will remain in 2023 as well and will even grow to a  greater extent, then yes, even taking into account the high base,  Armenia will be able to ensure a 7% GDP growth.

Let's not forget that the potential for generating GDP in Armenia,  according to various estimates, is approximately 4-4.5%.  If we had  an increase in productivity due to the fact that we once seriously  invested in some fantastic know-how, due to which the RA would move  to a qualitatively new level, and which would allow the republic to  claim even 7-8 % growth instead of 3-4%, then yes, we have the right  to claim growth above the current potential.

But, when considering the factors that determine the current growth  which are mainly exogenous factors, it becomes obvious that 11%  growth is clearly above our potential. At the same time, in order to  ensure a 7% GDP growth in 2023, after 11% in 2022, these factors  should not only remain, but also intensify.

To avoid such a negative economic development, the authorities had to  aggressively tax the "thriving" non-commercial sector, particularly  construction, in the first decade of the 2000s, thereby reducing the  profitability of this sector and preventing the non-trade sector from  strangling the trade sector and stealing its resources.

Indeed, it is impossible for Armenia's economy with its small volumes  to ensure a high level of economic stability against external shocks  as well as sustainable growth in the long term only due to the high  growth of the non-tradable sector of the economy and domestic  resources.  Therefore, if we cannot periodically increase the supply  of our goods and services to the outside world better than others, we  will have to forget about the prospect of sustainable economic  growth.

Today there is almost a similar situation, with the only difference  that at that time the whole world was booming. Meanwhile, today,  while the rest of the world announces an approaching recession, the  countries interconnected with Russia, such as Kazakhstan, Georgia,  and Armenia, are experiencing economic recovery. And, if in 2002-2008  the cycle lasted 9-11 years, today it may be shorter, and the  Armenian government needs to respond to risks promptly. Otherwise,  the Armenian economy runs the risk of being left alone with its problems.

- And how can we avoid repeating the negative scenario of 2002-2008?    The current government should revise its tax policy; start a more  aggressive administration, especially in areas that are booming under  the influence of external factors, in order to "cool" them. These  decisions are unpopular, but necessary.

Then, financial resources  should be directed to solving problems that ensure the strengthening  of economic potential in the long term, including in the field of  defense. After all, no one will dare to open a business with  long-term investments in a country where the implementation of the 4  pillars of economic stability - fiscal, monetary, political and  security,  is not ensured.  Without an appropriate policy, the growth  of the Armenian economy in 2023 and in the future will depend on  temporary factors: on the weakening or strengthening of anti-Russian  sanctions, as well as other geopolitical factors. Thus, even if we  consider that a greater confrontation between Russia and the West is  expected in the future, it may mean an even greater flow of Russian  immigrants and their capital for Armenia. In this case, we can state  with confidence that the 7% GDP growth in 2023 is realistic even  after this year's 14-15% growth, yes realistic, but dangerous for the  future of Armenia's economy.

But, since nothing lasts forever, even  sanctions, which at some point may exhaust themselves, the situation  is not so rosy for the Armenian economy - and sooner or later the  Armenian economy will have to face the harsh reality.